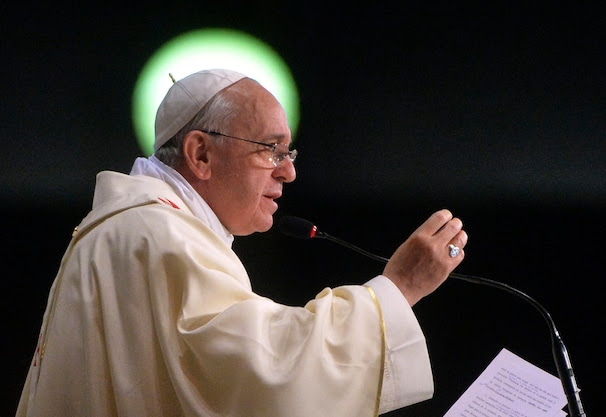 Seven months after ascending the throne of Saint Peter, Pope Francis is in the midst of a crusade against the sins of Vatican City.

Since succeeding Benedict XVI, Francis has publicly sought to transform the tone of his office, extending surprise olive branches to everyone from gays and lesbians to professed atheists.

But much more quietly, Vatican officials and observers say, the new pontiff has also begun to alter the atmosphere inside the Holy See, taking steps to shed light on the notoriously opaque Vatican Curia.

Before Benedict stepped down, documents leaked to the Italian news media detailed a lurid opera of rivalries and corruption inside the sprawling bureaucracy of 2,900 clerics and lay functionaries operating in the shadow of St. Peter’s Basilica.

Reform is seen as key to restoring the faith of the world’s 1 billion Catholics in the Vatican’s administration.

Observers say it is too early to gauge the depth or success of the pope’s internal reform effort.

But even many longtime Vatican critics say the new pope has already begun to confront the problem head-on in a way his predecessor never did.

In a place where change is often measured in decades if not centuries, Francis personally moved to oust top officials of the secretive Vatican bank only days after a fresh corruption scandal engulfed the institution, officials say.

Francis has also backed a push for greater financial transparency, while moving faster than many expected to replace Cardinal Tarcisio Bertone — Benedict’s secretary of state, who once wielded the power of a vice pope.

Bertone, who allegedly stymied efforts to clean up Vatican City, was seen by many observers as a big part of the Holy See’s problem.

Two Vatican officials with direct knowledge of the situation said the pope is preparing to consolidate the Curia’s myriad operations, with the aim of reducing the size of the bureaucracy.

Francis has recently suggested that clerics should focus on their home dioceses rather than angle for prestigious postings in the Holy See.

His new advisory board of eight cardinals from around the globe is seen as a counterweight to the power of Vatican-based authorities.

“Is this going to mean real change? We do not yet know,” said Massimo Teodori, a former Italian senator and longtime critic of the Holy See who penned a tome titled “The Greedy Vatican.”

“But something may be happening. There have been announcements and pronouncements, and under this pope, the power of the Curia around Cardinal Bertone is already no more.”

Inside the Vatican, a sense of apprehension similar to that of company management after the arrival of a crusading new chief executive has taken root.

Bishops who were once chatty with journalists have clammed up.

And after Bertone’s exit, the question floating around the ancient walls of the city-state is: Whose dome-hatted head could roll next?

Francis is also feeling the beginnings of a backlash.

Last week, two leading Italian commentators from the same camp as conservative members of the Curia unleashed a front-page tirade in the Foglio newspaper under the headline: “We don’t like the new pope.”

The outburst immediately led to the cancellation of both men’s shows on the Italian Catholic radio station, Radio Maria.

Though their commentaries had largely targeted what they called the new pope’s embrace of modernity and his Everyman approach to his lofty office, analysts here also read them as part of a pressure campaign against too much reform, too quickly.

“They know they can’t openly attack his structural reforms, so they attack him for his doctrine, accusing him of relativism and hurting the stature of the office of the pope,” said Carlo Marroni, the Vatican correspondent for the Milan-based financial newspaper Il Sole 24 Ore.

Changes at the bank

Perhaps no single entity inside Vatican City has seen the light of change more than the Institute for Religious Works, also known as the Vatican bank.

Founded in its modern form during the 1940s, the bank became a clearinghouse for donations and charities while facilitating the banking needs of those engaged in church business as well as diplomatic missions to the Holy See.

But the Vatican’s fiercely guarded sovereignty and culture of secrecy also made the bank an ideal target for criminals, enveloping the institution in scandals involving Mafia cash and corrupt clerics.

Inside the circular 15th-century citadel and former prison that houses the Vatican bank, priests, nuns and laity from all corners of the globe lined up on a recent afternoon to conduct their business with multilingual tellers.

A large wooden cross, framed pictures of Pope Francis, and ATMs with Latin-language options indicated that this was no ordinary bank.


But officials here insist it is trying to become one. Inside the former office of the bank’s president, a team of 25 consultants is now laboring under a dark painting of the Crucifixion.

The team from Promontory, a New York-based outfit specializing in regulatory policy and bank cleanups, arrived in July, with the mission of vetting every single account held by the Vatican bank’s 19,000 clients.

To be sure, the process of bank reform began under Benedict. But it gained momentum only in late 2012, when the Vatican brought in Rene Brulhart, the Swiss consultant who helped clean up Liechtenstein’s books, to take over the city-state’s relatively new financial watchdog.

Under Francis, the march toward transparency appears to have accelerated.

In August, he issued a papal edict against money laundering, which translated into enactment of a law last week that gave real teeth to Brulhart’s agency.

Last month, the bank released its first ever financial report (it is doing quite well, making $117 million last year, more than quadruple the 2011 figure. This year’s number is projected to be substantially lower partly because of the costs of the transparency campaign).

In June, for instance, Italian authorities arrested Monsignor Nunzio Scarano, a senior Vatican accountant who lived a lavish lifestyle and allegedly used his account at the Vatican bank for illicit deals.

Scarano, who denies wrongdoing and claims he actually tried to warn Vatican officials about internal wrongdoing and corruption, additionally stands accused of plotting with an unscrupulous secret service agent to shuttle nearly $27 million in undeclared funds from Switzerland to Italy.

The size of Scarano’s deals — including a single withdrawal of 560,000 euros, or $766,000 — made it hard to believe that the bank’s directors had failed to notice the transactions.

Within days of the case going public, both the bank’s director and deputy director had resigned. Or at least that was the public story.

Three Vatican officials said Francis had forced them out.

“He blazes a trail; everything we’re doing now is because he wants it,” said Ernst Von Freyberg, a German financier who arrived in February to help clean up the bank and who is now the acting director.

As more light is cast on the Vatican books, however, the scandals are likely to get worse. Last month, Reuters reported that Vatican regulators had flagged suspicious transactions being made from the diplomatic accounts held at the Vatican bank by several high-risk countries, including Iran.

Officials say that those accounts are now being investigated and that new procedures — standard among major international banks — are being put in place to ensure that more information is collected on clients and on large transactions.

Technically, only organizations and individuals related to the Catholic Church or Vatican City can maintain accounts at the bank, but officials are now uncovering accounts that either should have been closed or never opened.

Thus far, officials say, reviews have produced at least six instances of possible money laundering and a number of suspicious accounts are being closed, referred to Vatican judicial authorities or both.

Rome prosecutors say they are optimistic the bank’s new pledge of transparency will end the days when Vatican officials refused to cooperate fully in criminal investigations, believing they answered only to a higher power.

Meanwhile, critics say that while real changes may be afoot at the Vatican bank, reform must still expand to other Vatican agencies involved in contracts and financial issues.

“I do think we are seeing real change at the Vatican bank, but now we need to see those reforms built on and expanded elsewhere in the Vatican,” said Thomas Reese, a Jesuit priest and author of “Inside the Vatican.”

“That will be the real indication of the legacy Francis will leave on this question.”
EDITED BY CW Team