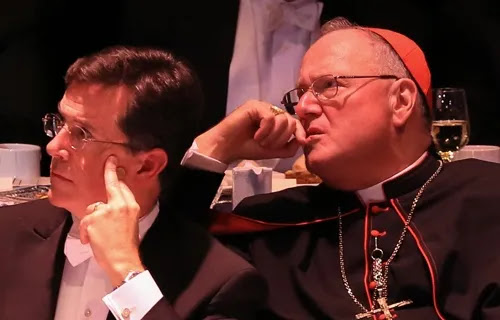 Faith and laughter abounded at the 68th annual Al Smith Dinner as comedian Stephen Colbert joked on politicians, big and small, the Pope, and Cardinal Dolan, and the cardinal made a few reflections of his own.

"A sense of humor comes from faith, faith that everything is in God's providential hands, a faith that frees us up to laugh," New York Archbishop Cardinal Timothy Dolan explained at the Oct. 17 dinner.

"My pleasant task is simply to thank God – thank God as we leave laughing, placing our guests, our honoree, our speaker, our board, our children that we love and help, the city that we love, our country we cherish, our families to which we're now going to return safely into His providential hands,"  Cardinal Dolan continued, closing the evening.

"For 68 years, this has been an evening of joy and friendship and charity to others," Cardinal Dolan said, explaining the tone of the dinner known for its humor, witty political commentary, and fund-raising efforts for Catholic Charities.

While it was clear that the dinner was organized to help those most in need, the keynote speaker admitted that he did hope to get something out of the night.

“I'm not getting paid for this – do I get a plenary indulgence or anything?” Colbert joked.

The comedian – host of the nightly news parody “The Colbert Report” – took the opportunity to poke at Cardinal Dolan, who has appeared on Colbert's show and at a 2012 conversation on faith and humor at New York's Jesuit college, Fordham University.

Though on his show Colbert plays a character that is sometimes assumed to be either an atheist or a common person unfamiliar with Church teaching, in real life, Colbert has affirmed his belief and fidelity to the Catholic Church. The father of three teaches a weekly catechism class at his local parish and often comments on the large Catholic family in which he grew up.

"Also I am the youngest of 11 children," Colbert explained, rushing through the names of all of his siblings in one breath.

"I will hold for you to applaud my parent's passionate obedience to 'Humane Vitae',” he continued, referencing  one of the documents outlining the Church's teaching on sexuality.

"I am proud to be America's most famous Catholic," the comedian joked, moving on. "I'm sure the Cardinal is thinking, Stephen, pride is a sin. Well Cardinal, so is envy, so we're even."

Cardinal Dolan's hearty chuckle could be heard above the laughs of the other attendees as the jokes directed at the cardinal continued.

Colbert acknowledged his respect and gratitude for the Cardinal's presence and friendship as well as his position. "Your Eminence. That's a title – that's a fantastic title. He's not just sitting there, he's 'emanating.' He's like a fog of cardinal-ness."

"On the other hand, The Eminence sounds like the most boring Spider-Man villain of all time," he deadpanned.

"I have great respect for Cardinal Dolan," Colbert continued, more seriously for a moment.

"Although I have to say, sir, it's not easy when you're wearing that outfit. In that cape and red sash – you look like a matador who's really let himself go," Colbert said to hearty guffaws.

"Did you not see the invite? It said white tie, not Flamboyant Zorro."

Colbert praised Cardinal Dolan's time and work in office, noting that "the Cardinal came this close to being selected Pope – but he blew it in the swimsuit competition."

The speaker took a bit of time to poke at both Catholics' and the media's response to Pope Francis, noting that many have said the new Roman Pontiff is "off message, saying Catholics need to stop obsessing," over controversial issues.  This new approach, Colbert said "forces me to ask the eternal question: Is the Pope Catholic? And if not, where are bears going to the bathroom?"

The comedian also took the time to joke about the new Pope's populist and modest style of leadership, saying that if Pope Francis had attended the dinner, “we wouldn’t be in white-tie at the Waldorf — we’d be in sweat pants at the corner booth of the IHOP.”

"If he was here," Colbert also said, “His Humbleness would be out washing the feet of the coat-check guy or something,” continuing, “We get it, you’re modest.”

The jokester's jibes were not all directed at Church figures, however, as the latter section of the speech lampooned both New York City and national political figures.

"And as a Catholic, engaged in the world of politics, I love that this dinner has no separation of Church and state," Colbert said, explaining the dinner's long history and political significance and recognition as an "American political ritual."

"So for those keeping track, the American political rituals are: this dinner, and the Republicans sacrificing 2014 to Ted Cruz's ego," he said, mocking the Texas senator's role in the recent federal government shutdown.

"We got close-ish in 2004 with John Kerry, who was a deeply Catholic candidate, in that listening to him talk was like attending a Latin Mass," he continued.

Turning to New York politics, Colbert warned Governor Andrew Cuomo that "Donald Trump is after your job. Sir, if you find orange bronzer stains on your office doorknob, just get out of there."

Threatening to bring the focus back to the charitable nature of the event, the speaker reminded the attendees that in "all seriousness, tonight is about the littlest among us."

"Speaking of which, is Mayor Bloomberg here?" he said, joking the mayor's size and adding that the real reason that the mayor instituted a ban on all sodas over 16 oz. "is because he's afraid he might drown in one."

"But of course the real little ones, are the children in need," Colbert reminded, closing out the speech.

"And hopefully, a large portion of this year's money will go to fixing the Obamacare website," Colbert added, sneaking in one last joke into the jovial speech that toyed with targets from both the Church and the state.
EDITED BY CW Team