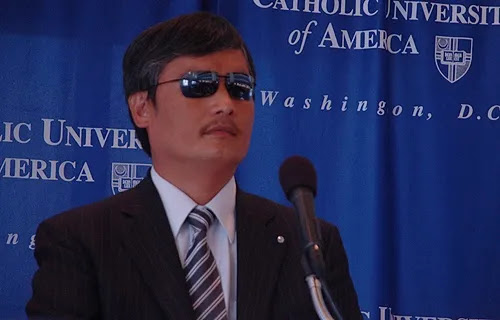 Chinese human rights activist Chen Guangcheng  has asked the international community to support and protect basic human rights and values in order to fight against totalitarian regimes and oppression.

“In today’s world, the greatest threat to human civilization is still the barbaric totalitarian system. Though such systems are few in number, they do great harm,” Chen said at an Oct. 16 lecture at Princeton University which was sponsored by the school's Witherspoon Institute.

Chen became a self-taught human rights lawyer while living in China, working against the country's one-child policy and the forced abortions and sterilizations occurring under it.

Chen's work gained the attention of the Chinese government, and he spent four years in prison for his advocacy. After his release from prison in September 2010, Chen was placed under house arrest without formal charges, and has stated that during this time, he and his family were treated harshly, beaten, and denied proper medical care.

Chen escaped from house arrest in April 2012, finding  refuge in the U.S. embassy in Beijing. The following month he was granted a fellowship at New York University’s law school, and he was allowed to leave the China.

In early October, it was announced that Chen would join the Witherspoon Institute as distinguished senior fellow in human rights.

At the Oct. 16 lecture, Chen emphasized that totalitarianism still presents “the greatest obstacle in humanity’s march toward justice and civilization.” However, he stated, people can work “to influence it with your universal values, such as freedom, equality, democracy, and constitutionalism.”

He pointed to “massive dictatorships such as the Chinese communist government” as examples of totalitarianism today, examining the Chinese government's abuses in its strict control of the media, forced abortion policies, and targeted punishment of human rights defenders.

Chen explained that by promoting human rights and working together, the Chinese people are “gradually … overcoming the fear in their hearts and boldly demanding the rights that are due to them.”

“A government without moral responsibility, legitimacy, and legality is like water without a source,” he said.  “We shall not be daunted by it. Our children shall not continue to live in fear, lies, and violence.”

Chen asked for the help of the United States and “kindhearted American people” in supporting Chinese people working against the abuses of the Chinese government. He asked all democratic countries, but particularly the United States, “to set a good example by shifting the focus from economy and trade to human rights, and from price to value, when dealing with dictators.”

When dealing with China, attaching “importance to economic interests alone will keep the United States further away from fundamental ideals such as freedom, democracy, and human rights, which are the founding principles,” of the United States, Chen said, urging Americans to act upon the values on which the nation was formed.
EDITED BY CW Team