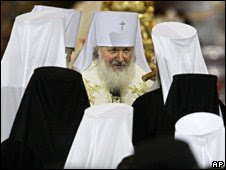 Walter Kasper, president of the Pontifical Council for Promoting Christian Unity in the Holy See, and the council's secretary, Bishop Brian Farrell, will attend the ceremony to enthrone Metropolitan Kirill as patriarch, a Russian church official said.

Vatican Secretary of State Cardinal Tarcisio Bertone may also attend the ceremony, the source said, adding however that his visit had not been officially confirmed.

The representative of the Holy See in Russia Archbishop Antonio Menini and head of the Moscow Catholic Archdiocese Paolo Pezzi will also be present at the ceremony at the sumptuous Christ the Savior Cathedral in central Moscow, which will also be attended by senior Russian and foreign government officials and public figures.

Metropolitan Kirill, 62, interim head of the world's largest Orthodox Church, won a church election on Tuesday, securing 508 of 677 valid votes. He will replace Patriarch Alexy II, who died in December at the age of 79, after leading the church's post-Soviet revival for 18 years.

Pope Benedict welcomed the Russian church's choice of a new leader on Wednesday.

"May the Almighty also bless your efforts to seek that fullness of communion which is the goal of Catholic-Orthodox collaboration and dialogue," Pope Benedict said in his message.

The Pontifical Council for Promoting Christian Unity said in an official statement that the Roman Catholic Church congratulated Metropolitan Kirill and hoped for better ties between the churches despite the "difficulties."

"We are happy that the new patriarch is a person with whom we had brotherly relations for many years," the statement said.

Kirill has led dialogue with the Vatican as head of the Russian Orthodox Church's external relations, the post he has occupied for more than a decade.

An articulate public speaker, Kirill is seen as a liberal figure in the largely traditionalist Russian church.

Relations between the Russian Orthodox Church and the Vatican, which split almost 1,000 years, have been strained since the breakup of the Soviet Union in 1991, mainly over accusations that the Catholic Church stepped up activities to convert believers.

The Vatican has denied this.