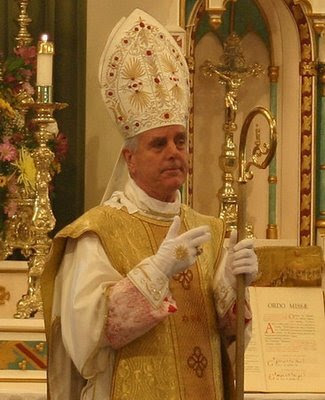 The potential suit follows a November interview he gave in Germany in which he called the murder of Jews in gas chambers "lies, lies, lies."

It is a crime in Germany to deny the Holocaust punishable by a prison sentence or fine.

Investigators are waiting for a full translation of Williamson's remarks from English into German before deciding how to proceed, Regensburg state Prosecutor Guenther Ruckdaeschel told JTA in a telephone interview Thursday.

The British-born Williamson is one of four bishops whom Pope Benedict XVI rehabilitated Sunday in hopes of healing a rift between conservative and progressive Catholics.

But instead of healing, the move by the German-born pope has shocked mainstream Church leaders and damaged Catholic-Jewish relations.

Charlotte Knobloch, head of Germany's Central Council of Jews, told the Rheinische Post newspaper Thursday that she expected a much larger outcry from church leaders, and said that for
the time being she would not continue talks with them.

Williamson made the remarks during a six-minute television interview with the Swedish SVT broadcaster, conducted in a cloister in Zaitzkofen, near Regensburg.

Williamson reportedly denied that any Jews were murdered in gas chambers during the Holocaust, and insisted that not more than 300,000 European Jews were killed in all.

He reportedly said at the end of the interview that he knew such comments were illegal in Germany.

As the controversy unfurls, the pope reiterated his "full solidarity" with the Jewish people. According to reports, the Vatican only learned of Williamson's Holocaust denial from news reports last week. Knobloch said she doubted Pope had been unaware of Williamson's views.