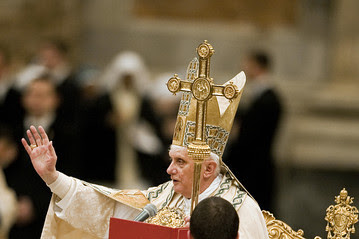 Amidst the endless imitators of Beyonce’s “Single Ladies” dance and replays of President Obama’s inaugural speech, Pope Benedict XVI will be making his own foray into the world of Internet stardom.

The Vatican announced last Friday that it launched its own channel on YouTube to keep viewers up to date with the activities of Pope Benedict XVI, as well as to celebrate “the capacity of the new technologies to foster and support good and healthy relationships and various forms of solidarity.”

So far, the Pope isn’t getting a whole lot of hits on his YouTube channel–the videos he has posted so far have hits numbering in the hundreds to the tens of thousands. But he does have nearly 28,000 “fans” on the Facebook page made in his honor (he doesn’t appear to have an official Facebook profile that users can befriend).

But the Pope needn’t worry about the spread of God’s message on the Internet–far more popular than his YouTube channel are family-friendly Web sites such as GodTube, a Christian social networking site that boasts 3 million unique visitors per month and whose rendition of “Baby Got Book,” a satire of the rapper Sir Mix-a-Lot’s anthem, “Baby Got Back,” has been viewed more than a million times (choice lines include “That book you got/makes me so Holy!”).

The Vatican also made a statement that the upcoming 43rd World Day of Social Communications on May 23 would center around technology (to be exact: “New Technologies, New Relationships: Promoting a culture of Respect, Dialogue and Friendship”), and urged young Catholics “to bring the witness of their faith to the digital world.”

Social networking sites such as Facebook and MySpace, the Vatican says, “are bringing about fundamental shifts in patterns of communication and human relationships….These technologies are truly a gift to humanity and we must endeavour to ensure that the benefits they offer are put at the service of all human individuals and communities, especially those who are most disadvantaged and vulnerable”.

But the statement also urged users of new technologies to maintain real relationships outside the online world: “If the desire for virtual connectedness becomes obsessive, it may in fact function to isolate individuals from real social interaction….We should be careful, therefore, never to trivialise the concept or the experience of friendship.” (In other words, don’t add acquaintances or bands just to increase your friend count.)

Pope Benedict XVI has made concerted efforts to keep Roman Catholicism in check with modern technological developments, though at times his actions have been perceived as a little eccentric (carbon offsets in Hungary, anyone?).

He may have raised eyebrows and provoked headlines over the weekend with his controversial decision to welcome four excommunicated bishops back into the fold of Roman Catholicism, but his supporters say he did so from a genuine desire to repair schisms within the church.