Pope: joy over election of Kirill as patriarch of Moscow 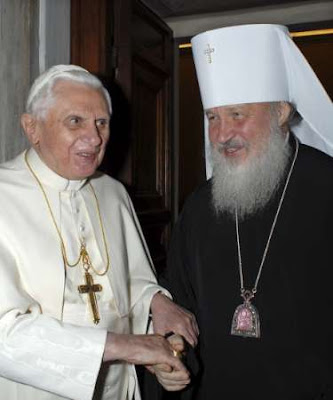 The "joy" of Benedict XVI for the election of Kirill as the new patriarch of Moscow. The pope expressed this personally, at the end of the general audience.

"It was with joy that I learned," he said, "of the election of metropolitan Kirill as the new patriarch of Moscow and all Russia. For him I invoke," he continued, "the light of the Holy Spirit, for generous service to the Russian Orthodox Church, entrusting him to the special protection of the Mother of God."

On December 6 of last year, Benedict XVI expressed his "deep emotion" over the death of Alexy II, and affirmed his "spiritual closeness" to the entire Russian Orthodox Church, speaking of the "common commitment to the journey of mutual comprehension and collaboration between Orthodox and Catholics," and recalling "the deceased patriarch's efforts for the rebirth of the Church, after the harsh ideological oppression that caused the martyrdom of so many witnesses to the Christian faith."

Today, also from the Vatican, the pontifical council for the promotion of Christian unity hailed the election of Kirill, recalling the "fraternal relations" in place with him "for many years," and the meetings that the metropolitan, as head of external relations for the patriarchate, had with Benedict XVI "immediately after his election in April of 2005, and then again during the months of May 2006 and December 2007."

"We trust," says a note from the Vatican dicastery, "that we will be able to continue the common journey of reconciliation that we have begun."

"We certainly do not want," the document continues, "to lose sight of the difficulties that remain, but we are willing and ready to cooperate in the social and cultural fields in order to bear witness to Christian values, without forgetting that the ultimate aim of dialogue is the realization of the testament of Jesus Christ, our Lord, meaning the full communion of all of his disciples." "We hope and we pray," the statement concludes, "that God may give the new patriarch abundant blessings, and guide him with the gift of strength and wisdom."

Paolo Pezzi, archbishop of the archdiocese of the Mother of God in Moscow, also speaks of "relations of fraternal understanding" in a message sent to the new patriarch. "I firmly hope," he writes, "that the relations of mutual fraternal understanding, trust, and collaboration that have been developed between our Churches, over the years of service of His Holiness Patriarch Alexy of beloved memory, may be developed and deepened further. In order for this to happen," he continues, "for our part, we are willing to do everything that depends on us. "I pray," Archbishop Pezzi concludes," that the service of the newly elected patriarch, with the help of divine grace, may serve to reinforce in the faithful their faith and devotion, including for the good and development of the entire Russian people and its state."

In December of 2007, Kirill had proposed abolishing all of the Catholic dioceses in Russia, as a first step to resolving the problems in the relationship between the Holy See and the Patriarchate of Moscow.

"We will never recognize them," he said in this regard, "and we will always contest the presence of normal Catholic dioceses in Russian territory, and we consider this a challenge to our common idea, connected to the territorial principle of the ecclesiastical administrations."