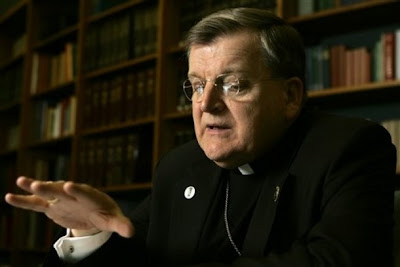 Vatican Archbishop Raymond Burke says that the USCCB's "Forming Consciences for aithful Citizenship" is partly to blame for the election of the "most pro-abortion president" in US history.

Catholic Online reports that Archbishop Burke, the prefect of the Apostolic Signatura, named a document on the election produced by the US Conference of Catholic Bishops that he said "led to confusion" among the faithful and led ultimately to massive support among Catholics for Barack Obama.

The US bishops' document, "Forming Consciences for Faithful Citizenship," stated that, under certain circumstances, a Catholic could in good conscience vote for a candidate who supports abortion because of "other grave reasons," as long as they do not intend to support that pro-abortion position.

Archbishop Burke, the former Archbishop of St. Louise Mo. and recently appointed head of the highest ecclesiastical court in the Catholic Church, told LifeSiteNews.com that although "there were a greater number of bishops who spoke up very clearly and firmly ... there was also a number who did not."

But most damaging, he said, was the document "Faithful Citizenship" that "led to confusion" among the voting Catholic population.

"While it stated that the issue of life was the first and most important issue, it went on in some specific areas to say 'but there are other issues' that are of comparable importance without making necessary distinctions."

Archbishop Burke, citing an article by a priest and ethics expert of St. Louis archdiocese, Msgr. Kevin McMahon, who analysed how the bishops' document actually contributed to the election of Obama, called its proposal "a kind of false thinking, that says, 'there's the evil of taking an innocent and defenceless human life but there are other evils and they're worthy of equal consideration.'

"But they're not. The economic situation, or opposition to the war in Iraq, or whatever it may be, those things don't rise to the same level as something that is always and everywhere evil, namely the killing of innocent and defenceless human life."

Archbishop Burke also cited the work of the official news service of the US Catholic Bishops' Conference, that many pro-life observers complained soft-pedalled the newly elected president's opposition to traditional morality.