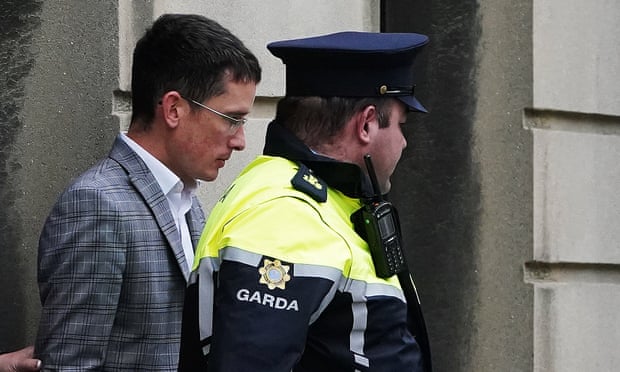 A school teacher in Ireland who refused to call a transgender pupil by the pronoun “they” has spent 11 days in prison for ignoring a court order to stay away from the school.

Enoch Burke failed to obtain a court injunction on Wednesday that would have paved his release and return to school, leaving him in Mountjoy prison in Dublin.

The evangelical Christian calls himself a prisoner of conscience and has won support from social conservatives and rightwing cultural commentators across the world since being jailed on 5 September.

A small group of supporters shouted in protest on Wednesday after a high court judge, Ms Justice Eileen Roberts, ruled against’s Burke’s attempt to overturn the school’s decision to suspend him with pay pending a disciplinary process. They applauded Burke as he was led away.

The dispute began after Wilson’s Hospital, a Church of Ireland co-ed school in County Westmeath, instructed staff that a pupil who was transitioning to another gender wished to be referred to by a new name and the pronoun “they”, a change supported by the pupil’s parents.

The school put Burke on paid administrative leave after he allegedly confronted the principal at a public event and questioned her in a “heated” manner, a claim Burke denies. After Burke continued to attend the school, it obtained a court order barring him from the campus. He continued to show up, prompting his jailing for contempt of court.

Burke has declined requests from the court to purge his contempt – in effect to promise to obey the barring order – and said he is being punished for his beliefs. “I am here today because I said I would not call a boy a girl,” he told the court last week. “Transgenderism is against my Christian belief. It is contrary to the scriptures, contrary to the ethos of the Church of Ireland and of my school.”

The case has been widely reported in the US and elsewhere, with some reports incorrectly suggesting Burke has been jailed for not using gender-neutral pronouns.

Liberal commentators have blamed the teacher for his predicament and derided those who consider him a free speech martyr. “His transformation into an icon of freedom of expression is frankly hilarious,” Fintan O’Toole wrote in the Irish Times. “Genghis Khan would be a better poster boy for tolerance.”

Burke holds degrees in theology, education and history and has been a teacher for 10 years. He is the author of a book, self-published in 2020, titled The Hedonism and Homosexuality of John Piper and Sam Allberry: the Truth of Scripture. It accuses the two evangelical pastors of “turning the grace of God into lasciviousness”.

Burke is from a prominent family. His parents, Martina and Sean Burke, home-schooled their 10 children. They have biblical names and excelled academically, winning scholarships, debating contests and other awards. They have became well known for running in student elections, staging protests about LGBTQ rights and suing universities and employers.