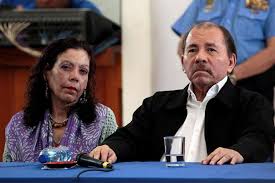 The dictatorship of President Daniel Ortega and his wife, Vice President Rosario Murillo, in Nicaragua has prohibited the upcoming processions in the town of Masaya in honor of St. Michael the Archangel and St. Jerome.

The Archdiocese of Managua said in a Sept. 17 statement that the “National Police of the city of Masaya have informed the Brotherhoods and Pastors of the Parishes of St. Michael the Archangel and St. Jerome, that for reasons of public security processions will not be allowed for the respective festivities of that city.”

The archdiocese asked “the devotees and those who have made promises to the patron saints, to keep in mind that faith and devotion are a treasure that we hold in our hearts and from there we can pay due homage with the strength of that ancestral heritage in our communities.”

“The Masses, novenas, and liturgical celebrations typical of both festivities will be held according to the program of each of the parishes in the respective churches,” the statement said.

The Archdiocese of Managua asked that “St. Michael the Archangel, St. Jerome, and the Blessed Virgin Mary, Mother of the Church and Queen of Peace, intercede and listen to the prayers [and] obtain healing for us from all ills with the medicine of God.”

Persecution of the Church in Nicaragua

This is not the first time that the dictatorship has prohibited a Catholic procession. In August, the regime ordered that the procession in honor of Our Lady of Fatima not be held as part of the Marian Congress.

St. Michael the Archangel parish in Masaya has been a target of the dictatorship before. In 2018, Ortega-backed paramilitary groups attacked demonstrators protesting government policies. In 2019, a group of mothers and Father Edwing Román went on a hunger strike to protest the onslaught of the Ortega police against the Church and the local population.

On Sept. 15, the European Parliament passed a resolution by a vote of 538 to 16 demanding the immediate release of the bishop of Matagalpa, Rolando Álvarez, who was abducted by the regime’s police from his chancery in Matagalpa in the middle of the night and taken to Managua, where he now remains under house arrest.

Currently there are also several priests who are being held in El Chipote, a prison in Managua known for torturing opponents of the regime: Father Oscar Benavidez of the Diocese of Siuna and Fathers Ramiro Tijerino, José Luis Diaz, Sadiel Eugarrios, and Raúl González from the Diocese of Matagalpa.

Also from the Diocese of Matagalpa, the dictatorship has imprisoned in El Chipote seminarians Darvin Leyva and Melquín Sequeira as well as cameraman Sergio Cárdenas.

With the exception of Benavidez, all the others were arrested at about 3 a.m. on Aug. 19 at the chancery in Matagalpa, the same time the police arrested Álvarez.

In August, the Sandinista regime forcibly shut down the radio stations run by the Diocese of Matagalpa.

Other victims of the persecution have been the apostolic nuncio to Nicaragua, Archbishop Waldemar Stanislaw Sommertag, who was expelled from the country in March, and the Missionaries of Charity, the congregation founded by St. Teresa of Calcutta, who were expelled in July.

The former auxiliary bishop of Managua, Silvio Baez, has been living in exile in the United States after it became known that Ortega’s government had very probably ordered his assassination.

The persecution of the Catholic Church in Nicaragua has been increasing for years. The bishops accurately warned of the dictatorial drift of the Ortega government as early as 2014. The bishops have decried the indiscriminate use of force by the regime in cracking down on the opposition, beginning in 2018 when it brutally repressed protesters demanding change.

More than 350 people died and thousands were injured in Nicaragua as “combined forces” of regular police, riot police, paramilitaries, and pro-government vigilantes attacked anti-government protests. At least eight churches were desecrated during the turmoil.

Because the Catholic Church supported the demonstrators’ cause, the government ramped up the pressure on bishops, priests, religious, and lay faithful.

Ortega, who has been in power for 15 years, has been openly hostile to the Catholic Church in the country. He alleged bishops were part of an attempted coup to drive him out of office in 2018 because they supported anti-government demonstrations that his regime brutally suppressed. The Nicaraguan president has called the bishops “terrorists” and “devils in cassocks.”

According to a report titled “Nicaragua: A Persecuted Church? (2018–2022),” compiled by attorney Martha Patricia Molina Montenegro, a member of the Pro-Transparency and Anti-Corruption Observatory, in fewer than four years, the Catholic Church in Nicaragua has been the target of 190 attacks and desecrations, including a fire in the Managua Cathedral as well as police harassment and persecution of bishops and priests.