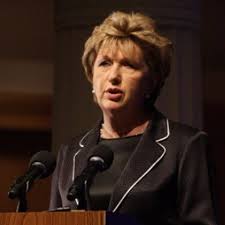 Former president Mary McAleese has called on Pope Francis to remove “awful material” from a Vatican website set up in 2016 which she said “offends all women and the creator who made them”.

The document, which blames all human ills on women, including the death of Jesus Christ, appears on the website of the Dicastery (Department) for the Laity, the Family and Life. It appears in English, French and Italian, but not in Spanish or Portuguese translations.

Written by Tertullian, one of the early church fathers who died almost 2,000 years ago in 230AD, it addresses women as “the devil’s gateway: you are the unsealer of that [forbidden] tree: you are the first deserter of the divine law: you are she who persuaded him whom the devil was not valiant enough to attack. You destroyed so easily God’s image, man. On account of your desert – that is, death – even the Son of God had to die.”

On September 6th, Mrs McAleese wrote to Pope Francis seeking “urgent clarification of offensive sexist material published by the Discastery for Laity, the Family and Life”.

Addressing Pope Francis directly, she said: “So here we are at the start of the implementation of your great curial reform and it absolutely beggars belief that the worst-ever offensive sexist material is published with unambiguous approval by the Dicastery for the Laity‚ Family and Life… a dicastery you charged with responsibility for women.”

It was the case, she said, that “the sensus fidelium [the people’s sense of the faith] rejects magisterial teaching on women… The Dicastery for Laity, Family and Life is manifestly driven by an ignorant backward agenda which will drive the church into further scandal and crisis unless radically reformed. The church would be better off if it was closed down and all matters within its competence remitted to national competence. At a minimum, this awful material must be removed from the magisterium’s official website. It offends all women and the creator who made them.”

She hoped Pope Francis would “be able to restore reassurance to the many women who still stay faithful to the church in spite of such gratuitous assaults on their God-given dignity and equality” and signed herself as Dr Mary McAleese, President of Ireland 1997-2011.

Prefect (head) of the Discastery for Laity, Family and Life since it was set up in 2016 is Dubliner Cardinal Kevin Farrell, a former Legionary of Christ who spent much of his clerical career in the US.

In 2018, he barred Mrs McAleese from taking part in a conference to mark International Women’s Day which was originally due to take place at the Vatican. Organisers then moved the Why Women Matter conference to a premises just outside the Vatican and invited Mrs McAleese to be its keynote speaker. She was originally asked to be a panellist in a discussion group at the event.

The Legionaries of Christ, founded in Mexico by disgraced Fr Marcial Maciel in 1941, is a deeply conservative and very wealthy religious congregation. Maciel, who died in 2008, was removed from ministry in 2006 by Pope Benedict XVI when the Vatican at last believed decades-long allegations of sexual abuse of children and seminarians by Maciel, as well as accepting that he had fathered numerous children by various women.

During his papacy Pope St John Paul II celebrated Maciel as an “efficacious guide to youth” and refused to believe any of the allegations made against him.

From Drimnagh, Cardinal Farrell and his brother, Bishop Brian Farrell, currently secretary of the Vatican’s Council for Promoting Christian Unity, were both recruited to the Legionaries of Christ as young men. Cardinal Farrell is also Camerlengo at the Vatican, whose responsibilities include the announcement of a pope’s death and helping organise the funeral, as well as election of a successor.