N.Y. bishop who was robbed during livestreamed service clashes with woman in latest church broadcast 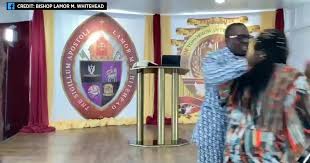 The New York City bishop who was robbed of around $1 million in jewelry during a livestreamed service in July was removed from his church by police Sunday after video appeared to show him grabbing a woman and pushing her.

Bishop Lamor Whitehead, 44, was preaching at the Leaders of Tomorrow International Ministries church in Brooklyn’s Canarsie neighborhood when someone in the congregation started yelling inaudibly off-camera. He paused the service to respond.

"You wanna come preach?" he's heard saying toward the end of the livestreamed service. "Come on up here. I'm gonna make you famous."

As a woman approaches him, video appears to show the bishop grabbing her hair by the back of her neck and pushing her off-camera.

"Grab her out," Whitehead is heard saying out of view of the camera.

Officers who responded to a 911 call about the dispute removed Whitehead and the woman from the church and took them to the 69th Precinct, New York City police said.

Police said the woman, identified as Tarsha Howard, 47, was recording the church service. When she was asked to stop and leave the church, she "began to antagonize the parish Bishop and approached him on stage," police said. "The Bishop then physically removed the female from the location."

Whitehead said in a video on Facebook that that's not true, saying police arrested him and put him in a holding cell.

Once "higher-ups" found out he was at the precinct, Whitehead said, charges against him were dropped.

“You put me in prison and then let me out and say, 'Oops, you made a mistake’?” he said in the video. "But you don't get to arrest me for no reason. I'm going to protect my family."

The bishop alleged in another video that he allowed Howard to "speak her piece" and stepped in only once she started moving toward his wife and 10-month-old daughter.

“I allowed the lady to talk, speak her piece and curse me out and do whatever she wanted to do, but then when she said ‘and she’ and started to throw threats at my wife and started to charge at my wife, that’s what you guys saw,” he said. “My wife have my baby in her hand, and we’re not going to have another rendition of my daughter being in harm’s way or my wife being in harm’s way.”

Whitehead was referring to the incident in July, when three gunmen burst into his church during a service and made off with $1 million worth of jewelry.

“When I see them come into the sanctuary with their guns, I told everybody to get out, everybody just get out,” he said in a video on Instagram after the robbery. “I didn’t know if they wanted to shoot the church up or if they were just coming for a robbery.”

Whitehead said at a news conference in front of the 69th Precinct, where he was taken after the church dispute, that he plans to file a complaint against the police department.