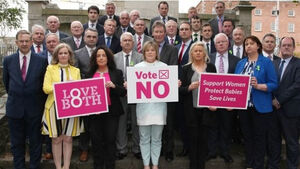 A Fianna Fáil minister who campaigned for a No vote on abortion says her position has changed and she now believes the law does not go far enough in this country.

Anne Rabbitte, who was among a group of Fianna Fáil TDs and senators who posed for a now infamous picture ahead of the 2018 referendum, admits she was out of touch with her electorate who voted overwhelmingly in favour of repealing the Eighth Amendment.

In a candid interview with the Irish Examiner, the Minister of State for Disabilities said she believes her outspoken approach to various issues could see overlooked when it comes to further promotion within the party and to Cabinet.

Ms Rabbitte, who has publicly criticised the HSE on a number of issues, has said she "absolutely" believes her straight-talking approach may work against her in December's expected reshuffle.

"I'd love to hold on to being a minister, and one doesn't know because there are some very, very capable people in all backbenches," she said.

On the issue of abortion, she said her opinion has now changed after being "amazed" by the elderly women of Ireland who voted in favour of providing access to terminations, and has also been influenced by her two teenage daughters.

"It just didn't happen that there was a lightbulb moment," she said. "People have amazed me. Women that I would meet in my own area, that would be in their 80s would turn to me and say: 'Yes, I voted yes because I remember the marriage bar, and I remember the mother and baby homes, and I know what happened and yes, I think it's right that women would have their own say.'

"What also amazed me is my own two daughters — one is 19 and one is under 18. My youngest regularly would keep me in check and perhaps that's where I have come to that position, that actually it's OK to change your opinion and it's OK to let people know."

She added that altering your views shows that you are "in touch" and listening to people.

My electorate overwhelmingly accepted repealing the Eighth, and I was behind the curve."

While Ms Rabbitte wouldn't comment on the current review of abortion legislation, she said: "Where couples are given news that perhaps the baby won't survive, and it's clinically the opinion of the gynecologist, we have to leave the choice of their healthcare to the couples themselves. I do think it's wrong that they have to leave the State.

"I still don't think we have addressed that piece of it."