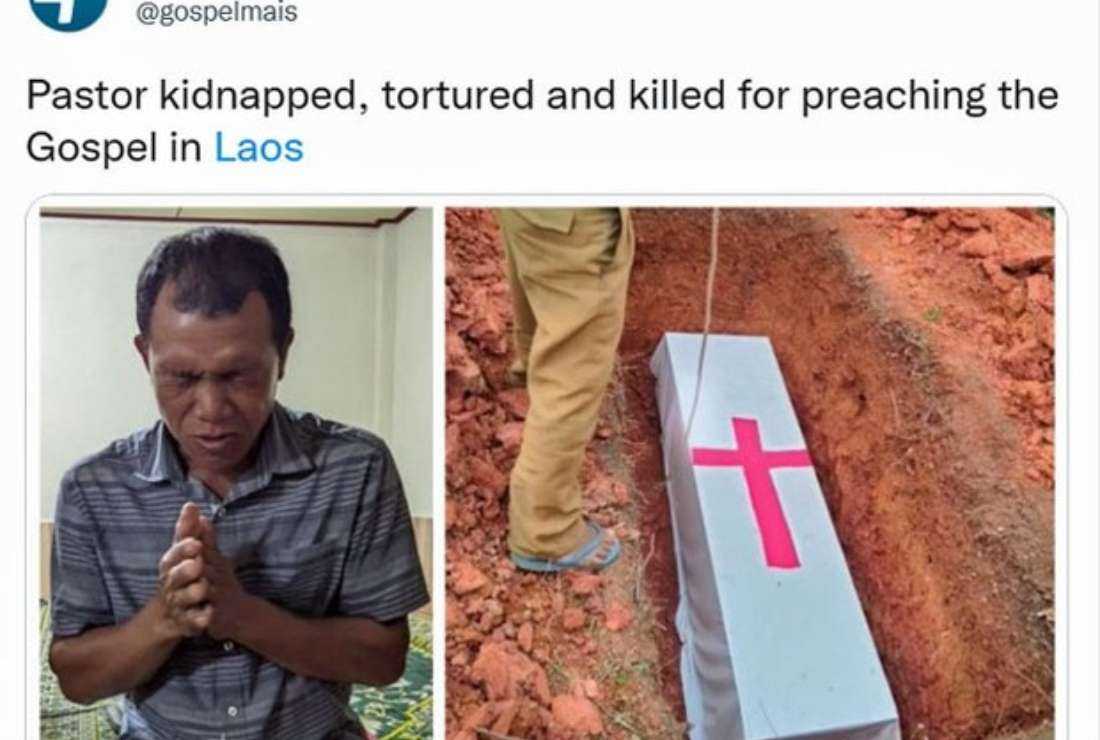 Christians in Laos have demanded the arrest of the culprits after an Evangelical pastor was kidnapped, brutally murdered, and his body dumped in a forest in the latest attack against Christians in the Southeast Asian nation.

The gruesome killing has alarmed the country’s minority Christians who for years have endured abuses and persecution in the Buddhist-majority country where many view Christianity as a subversive foreign faith.

Sy Seng Manee, 48, was found dead near his motorbike in a forest area near the road to Donkeo village in Khammouane province on Oct. 23, Radio Free Asia (RFA) reported on Nov. 15.

A Christian preacher who declined to be named for fear of his safety called upon the police to initiate a speedy investigation to arrest the murderers.

“If the murderers are not arrested, it will strongly affect the Christian community. In the past, each time a situation like this happened, there was a related sector responsible for thoroughly investigating the case,” he said.

The preacher also stated that the level of persecution varies from district to district.

“Each district is different in terms of other religious beliefs. Some provinces are strict, and some are loose when it comes to harassment,” he said.

Sy was expected to attend a meeting with fellow believers on Oct. 20 in Thakhek, about 100 kilometers (62 miles) from his home in Khammouane province.

Lao police said they are still investigating the death.

“His death was due to his belief in Christianity. They don’t like the Christian religion, so that’s what they do,” said a village resident on condition of anonymity for the fear of his own safety.

An unnamed witness had earlier stated that on Oct. 20, he had seen three men in an unmarked black truck drag the pastor in and speed off.

However, unaware at the time that the victim was Sy, the villager assumed that it may have been a drug bust or the arrest of a criminal and did not further pursue the matter.

The villager alerted Sy’s family of the kidnapping only when his body was discovered in the forest, and he understood that the victim was the preacher and not a criminal.

Meanwhile, an unnamed Evangelical leader has pointed his fingers at the regime that supports persecution of Christians in the nation, the Christian Post reported.

“The great injustice about the whole situation is that those in authority were either directly or indirectly involved in Sy’s murder,” the leader said.

Earlier in August 2018, the authorities arrested Sy for conducting meetings in his house to preach to the villagers, locals said.

The authorities tried to coax him into signing a document denouncing his Christian faith and promising to stop preaching his beliefs. Sy refused the demand and was jailed for three days and fined.

A few years after his release, Sy began preaching again until he disappeared this October and turned up dead.

The Law on the Evangelical Church, which took effect in 2019 assures Christians’ freedom to conduct services and preach throughout the country and to maintain contacts with believers in other countries.

The churches should also fund their operations, and obey any other Lao laws, rules, and regulations.

Despite having a clear law to practice their religion, Christians in the land-locked Communist-ruled nation often face sanctions at varied levels from local authorities. Locals consider Christianity as an alien religion and detrimental to traditional animist practices.

Christians in the more cosmopolitan capital Vientiane and other larger cities can practice their faith freely, yet this is not the case in many rural communities where officials often act against Christians with relative impunity.

In February 2021, villagers attacked 12 members of a Christian family in Dong Savanh in southern Laos and drove them from their homes. In 2017, the family had been expelled from their village.

Also in February 2021, an ethnic Hmong Christian community leader named Cha Xiong was shot dead. The local authorities said that they still have no suspects.

Pastor Sithon Thippavong, a Lao leader in Savannakhet, was arrested for refusing to sign a document denouncing his Christian faith, and was later jailed for a year on charges of “disrupting unity” and “creating disorder.”

In October 2020, authorities destroyed the homes of seven Christians in Saravan Province’s Ta Oy District for refusing to recant their faith and expelled them from the village.

Laos is ranked 26th among the 50 countries where it is most difficult to be a Christian on the 2022 World Watch List by the global Christian rights group, Open Doors.

Open Doors estimates Christians account for about 203,000 or 2.8 percent out of the total population of 7.2 million.