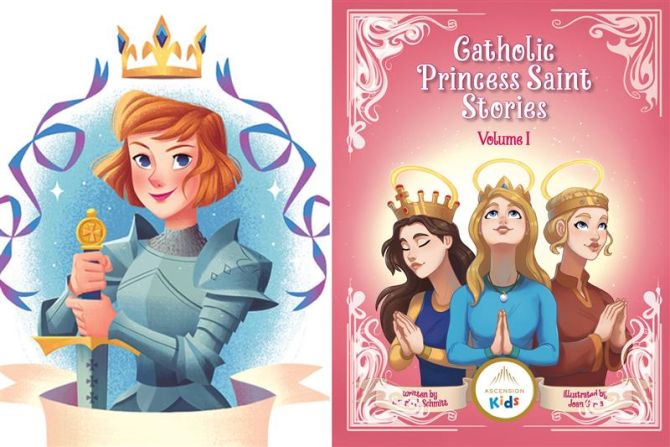 A major Catholic publishing house is pulling a book on Catholic princess saints days after an illustrator took to social media saying that the company had published the book based on her ideas and illustrations.

Ascension, a publisher of Catholic books and digital media, including Father Mike Schmitz’s “Bible in a Year” podcast, emailed a statement to CNA Tuesday announcing that it would no longer be selling the book, “Catholic Princess Saint Stories, Volume I,” which was released earlier this month.

Fabiola Garza, the illustrator who is at odds with Ascension, posted on social media that she had spent months talking with the publisher about plans for a book on princess saints. When those talks did not lead to a contract, she decided to shop her idea around, and eventually signed a contract with Word on Fire to publish a book on princess saints.

Garza, who works as an illustrator for the Disney Design Group in Orlando, Florida, published an account of her dealings with Ascension on Instagram, Facebook, and Twitter following the publication of the publisher’s book on princess saints.

“PLEASE SHARE Hold Ascension accountable,” Garza wrote. “MY EXPERIENCE WITH ASCENSION HAS BEEN THE MOST AWFUL OF MY CAREER. I like many artists cannot afford a lawyer, and my hope is that by making this known no other Catholic creative will have to go through this,” she wrote.

In her social media post, Garza said that in 2019 she was approached by an editor at Ascension about a book on saints who were princesses.

“Ascension contacted me because he heard me speaking on Leah Darrow’s Podcast about my idea to do a PRINCESS SAINTS BOOK," she wrote, adding that she signed a mutual non-disclosure agreement with the publisher.

"In the end, I decided not to sign with ASCENSION,” she wrote in the social media post.

In its statement, Ascension said it had decided to pull the book after Garza went public with her story.

“An illustrator Ascension worked with several years ago recently posted on social media about her experience working with us. We strongly disagree with the allegations in her post and we are confident that our approach was consistent with the law and industry standards,” the statement said.

“Nevertheless, as a leader in Catholic publishing, Ascension aspires to hold itself to a higher standard and we will therefore be voluntarily discontinuing sales of the book in question,” the statement said.

In its statement Ascension said that after Garza told the publisher that she had decided not to work with the company it went ahead with plans to come out with a book about princess saints by a different author and illustrator. Ascension maintains that the book it published was different from the one it had discussed with Garza.

Over the eight months Ascension had discussed the project Garza had provided one illustration of St. Joan of Arc, and when it went with a new illustrator, it chose different saints to highlight, Ascension said.

“As we each had different creative visions for the project, we continued our vision with a new illustrator. We chose different saints for our book alongside a different storytelling style and different illustrations,” Ascension said.

“For background on the project, we provided the new illustrator with the single image of St. Joan of Arc that Fabiola had shared publicly. Our new illustrator went on to create illustrations for 80 pages of stories about St. Margaret of Scotland, St. Bathild of France, and St. Jadwiga of Poland,” read the statement.

Garza posted photos of her illustration of St. Joan of Arc alongside an illustration from Ascension’s book, noting the similarities between the two. Both illustrations feature blue ribbons and banners surrounding the drawings of the saints.

In its statement, Ascension denied any wrongdoing but said it regretted showing the new illustrator Garza’s original drawing.

“Any similarities between Fabiola’s St. Joan of Arc drawing and our illustrator’s depiction of St. Margaret of Scotland (such as a banner, ribbons, a crown, and a blue garment) are incidental and common in portraits of princesses in works by other artists,” the company said.

“Nevertheless, we understand and respect that Fabiola is deeply invested in her artwork, and we acknowledge that a better course of action would have been to use other public sources rather than her drawing as a reference for our illustrator."

Garza posted emails she had exchanged with Ascension. In their correspondence, she says that on Oct. 7, 2020, she decided to discontinue talks on the book because no contract had been signed.

Garza wrote to Ascension explaining her reason for looking for another publisher.

She said she had asked for “some details on contract and compensation before I continued to work.” She said she was told “that we hadn’t got to the contract stage because we didn’t yet have a complete sample chapter.” She said she was told that the firm was “contemplating bringing in another author entirely, who I would have no ability to vet, interview, or apparently control in any way.”

In an email to CNA, Ascension said that it never signed a contract in part because Garza “wanted to be both the author and illustrator.”

“This creative difference was one of the key reasons that Fabiola and Ascension never signed a contract together,” Ascension said in its statement.

Garza told CNA that she decided to break off talks with the publisher because she began to get nervous when no contract was proposed.

After emailing Ascension earlier this month to express her disappointment that it had published a book on princess saints, the publishing house offered to compensate her for the time spent on the project.

Garza then took to social media because, she told CNA, she could not afford to get legal help. She explained that she felt that by going public she could help other “Catholic creatives” facing similar situations.

“So many people have emailed me with similar stories, and nobody has ever talked about it publicly. I could see that I’m in a position to do this, and perhaps I owe it to the community to start a conversation on it,” she said. “But if everything has always been treated in a very hush hush way, I was like, 'There's never going to be any change.'”

Upon being informed by CNA that Ascension had pulled its book, Garza said she was relieved.

“Oh, my gosh, I'm gonna cry,” she said after reading Ascension’s statement. “I know that it's not a direct apology. I mean, it's corporate speak, you know. I understand that they have to protect themselves as much as possible. I would have loved a direct apology,” she said.

“But even the fact that because of people helping this is able to happen without having to go to court is amazing, because that sounded awful. Yeah, that sounded awful,” Garza said. Later, Garza thanked Ascension for pulling the book.

Her book with Word on Fire is written but still being edited and won’t be published for over a year, adding that she works full-time.