Pope made honorary citizen of Asti, greets faithful in popemobile 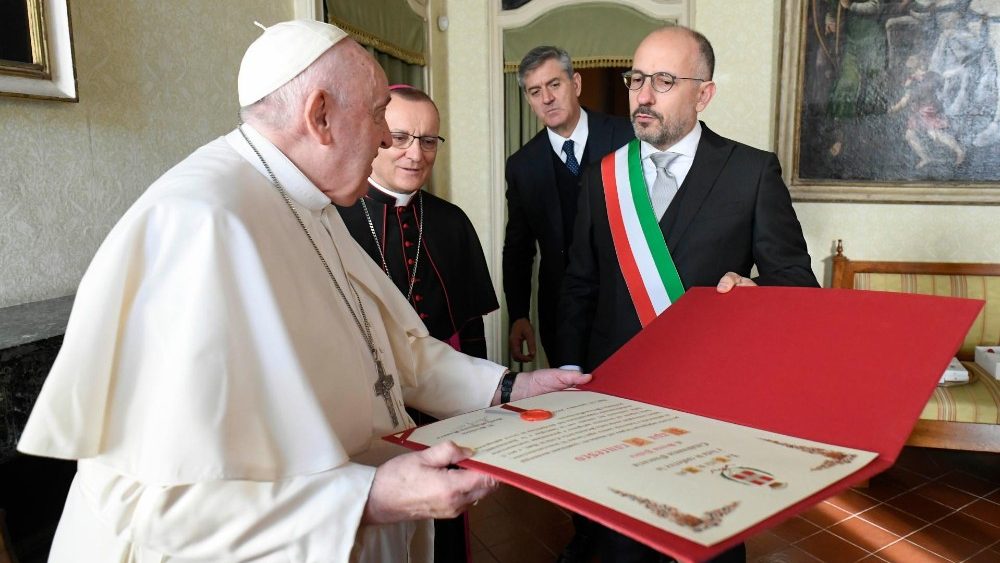 Pope Francis carried out his public events on the second day of his visit to Asti.

On Saturday he spent private time with relatives and a visit with the elderly at a retirement home.

On Sunday at the Bishop's chancery, where he is a guest, he met with the Mayor of Asti, the President of the Piedmont Region of Italy, Alberto Cirio, and other representatives of local institutions.

Mayor Maurizio Rasero conferred honorary citizenship on the Pope "for his strong commitment to peace in the world and his daily messages of solidarity and fraternity against all forms of discrimination," values that are also enshrined in the Statute of the City of Asti, and also for his strong ties with the Asti and Piedmontese territory, with his ongoing contacts with his family and the institutions, symbolically represented by a small bag of Asti soil taken from Bricco Marmorito.

Popemobile from Bishop's Chancery to Cathedral

After this first public moment, Pope Francis went to the Cathedral with the popemobile, greeting throngs of people gathering in the centre of Asti from the early morning hours.

He travelled 1.7 kilometres from the Curia to Piazza Catena, where people with disabilities and the infirm awaited him.

The Pope arrived at the cathedral at around 10:30 where shortly after he presided over the Mass for the Solemnity of Christ the King, also the day the Church marks World Youth Day celebrated.

Following the celebration he led the recitation of the Angelus.

Around 25,000 people are expected in the city, 4,000 in the large cathedral, and many more in the areas set up outside with large screens.