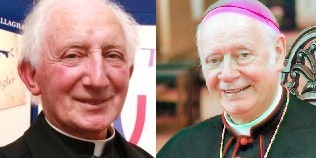 THE administrator of the Catholic Diocese of Cloyne has issued what amounts to a gagging order on its former child protection officer, Monsignor Denis O’Callaghan, as it emerged a local priest is receiving text messages from women who claim he molested them.

The priest, who has faced a string of sexual abuse allegations, has complained to north Cork gardaí that he is receiving unsolicited text messages.

Archbishop of Cashel and Emly Dr Dermot Clifford, Apostolic Administrator of Cloyne, has asked Mgr O’Callaghan not to make any further comment on his failure to implement child safety guidelines after he wrote a letter to the Irish Catholic newspaper seeking to explain his actions.

In the letter, Mgr O’Callaghan, the former diocesan child protection delegate, said he should have resigned his position rather than continue in a job where he disagreed with the child protection guidelines he was expected to enforce.

However, he insisted his primary focus was always on the pastoral care of "everyone suffering the consequences of sex abuse, primarily the victim but also the transgressor".

Mgr O’Callaghan, who was criticised by the Murphy Commission for his inadequate handling of abuse allegations, wrote: "Judge Yvonne Murphy was made aware of the Cloyne commitment to pastoral care, but the commission focused on its remit of reporting on whether or not procedures were fulfilled."

He also sought to justify his decision to ignore the mandatory requirement to report abuse allegations to the civil authorities on the grounds that, "for most of those priests accused in Cloyne the complaints alleged incidents dating back over 30 or 40 years".

In response, Dr Clifford said he agreed Mgr O’Callaghan should have resigned once he decided he could not implement the 1996 Framework Document from the Catholic Bishops on safeguarding of children, as his bishop, Dr Magee, had agreed to implement it.

Meanwhile, the priest in receipt of text messages has told gardaí that they have been "very stressful" for him.

Two women, accompanied by solicitors, have been interviewed by gardaí in relation to the matter and a file is being sent to the DPP.

The victims expressed deep anger at the priest’s actions.

One woman said: "He is just playing the system again. Everything has been done by the Church for this man, and here he is causing us more pain all over again."