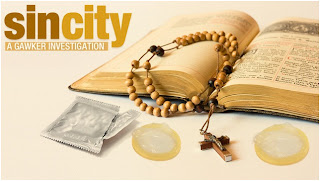 A survey carried out by a group of lay faithful, documents a network of homosexual priests in the diocese headed by Archbishop John C. Favalora.
The news was given by and American gossip newspaper the “Gawker”.

The article, entitled “Sin City”, was published along with a photoshopped image of  a rosary placed on top of a Gospel next to two condoms,
Source:  an investigation carried out on a network of homosexual priests in the diocese of Miami by a group of lay people from South Florida who were calling themselves “Christifidelis”.

The investigation could have played a part in the premature removal of Archbishop John C. Favalora and his replacement with a serious Bishop, Thomas Wenski.

The report is over 400 pages long and Gawker, in an article written by Brandon K. Thorp, former reporter for the Miami New Times called – too easily – “Miami Vice”, is about 100 pages long. Some excerpts are provided below but the report and the article raise many questions.

What is known for sure is that last year Favalora left, leaving no explanation, even though he was still in excellent health; it is also known that during Benedict XVI’s leadership, homosexual priests, and Bishops in the Curia who, outside, were suspected or more than suspected of having love affairs and relationships, were systematically expelled.

This perhaps explains why Pope Ratzinger is disliked in homosexual circles, a dislike which was openly demonstrated with obscene messages printed on banners at the Gay pride event  in Rome; but why did it take so long?

And if Miami was an exemplary and extraordinary case, maybe there are other small Miamis elsewhere, for example in the center and south of Italy?

“So much filth in the Church,” the then Cardinal Joseph Ratzinger had commented. the work he is doing, silently, appears to justify that accusation.
According to Thorp, the retired Archbishop was a shareholder in a company that produced “Yohimbe”, an aphrodisiac drink; he was accused of making trips to Key West with friends of his who shared his tastes; he appeared to be too familiar with seminarians (a former employee of the diocese recalls hearing him say to a young man, during a meeting in the seminary, “come to daddy and sit here on my lap.”

The Seminary of St. John Vianney, located in the south-east of Dade, according to Thorp, “was a sort of gay Hogwarts with palms,” referring to Harry Potter’s college.

It appears the seminary has a long history of gay love;  according to Thorp, Peter Fuchs, a former student, had had a fiery story with Bernies Kirlin, who was rector at the time and who later became a priest and went to Coral Gabels.

“I probably entered the seminary partly because I was attracted to the idea of being in a gay world” said Fuchs, a scholar who lives with his partner in Washington, D.C. “But I was also interested in theology, in the great questions.”  The approach used with Fuchs was, to say the least, direct: Kirlin placed his hand between his legs. “Then he apologized and we became friends,” said Fuchs.
Thorp’s story, which is all based on lay investigations, mentions many other priests in South Florida accused of homosexual activities.

Priests who lived with boyfriends, priests who lived as lovers with other priests, a priest who owned a luxury villa in Coral Gables and was keen on drugs, another who went jogging naked, a priest who regularly sent photos of his bits to children, an official who was involved in children  trafficking and another who enjoyed bondage; the list goes on.
Of course Thorp is aware of the legal risks, and in fact wrote: “in cases where it was not possible to confirm charges against individuals, we prepared the information in such a way that it would be impossible to identify them.”

John C. Favalora was the head of the Catholic Church in South Florida from 1994 to last year.
The report accuses him of permitting and promoting “a homosexual super-culture” in the 195 churches, schools, missions, seminaries and universities that make up the Archdiocese of Miami.

This all carried on with no or very few problems until 2005, when a group of lays people, headed by a lawyer, Sharon Bourassa, decided to set up a wide-range investigation of the behavior of priests in the Archdiocese.

The report was sent to the Vatican; and we were discreetly informed that the issue had been brought to the attention of Benedict XVI, and that it certainly played a role in Favalora’s resignation, almost one year earlier than it was due and for no apparent reason.
Any anyone who did not bow their head, was eliminated.  This was the case of Father Andrei Dowgiert, of the Church of All Saints, in Sunrise.

A Polish priest who had spent time in Zimbabwe, shortly after his arrival, was sent away because he had acted violently towards a boy. Dowgiert was transferred to the parish of the Good Shepherd, where he filed a complaint in which he claimed the parish priest had tried to seduce him.

He was transferred again, in spite of protests from parishioners.

The subsequent transfer alas, placed him into contact with Monsignor Morales, protected by Favalora and definitely homosexual.  Dowgiert’s curiosity on a wide range of issues put him in open conflict with the head of the Archdiocese which eventually led to his dismissal.

This set the laymen in motion.

Why, they wondered, did the diocese defend a non-celibate homosexual priest, with a behavior history that was far from priestly, against a priest who did his duty.

When a lay woman, Gloria Luca, began to ask questions and was fired shortly after, other lay people began looking for answers. This gave birth to “Christifidelis” and led to the 400 page report.

In 2006 Sharon Bourassa received a visit by a senior Vatican Cardinal but for a time nothing more was said.

Favalora left eight months before his75th birthday, which is the age at which bishops usually express their desire to retire (an extension of one or more years is usually granted).

It seems that Thomas Wenski, who had been asked to join him in leading the diocese, replied that he did  not want anything to do with him.

Finally, Wenski was appointed, alone, and began to clean up the mess.

The diocese of Miami was not spared from the sexual abuse problem.

In fact, Neil Doherty, one of the nastiest sex criminal ever arrested in the USA, was a pupil of the St. John Vianney Seminary, and spent most of his “carrier” in Florida.

He served as Director of Vocations at the Seminary and for thirty years he raped boys, drugging them with alcohol and Quaaludes and sodomizing them. He was one of Kirlin’s best friends.

It makes one wonder how much Kirlin and Favalora knew about this.

Article Can Be Acessed Here