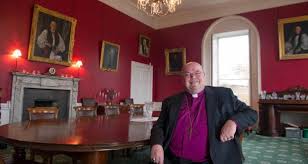 Irish society and churches need to confront the reality of what happened in mother and baby homes and ensure similar scandals are not allowed to happen in modern Ireland, a leading church man has told his congregation.

Church of Ireland Bishop of Cork, Cloyne and Ross, Dr Paul Colton, said stories emerging from institutions for unmarried mothers run by the Catholic Church and the Church of Ireland were deeply unsettling and challenging for people of all faiths in Ireland.

Speaking at the St Patrick’s Day Civic Service at St Fin Barre’s Cathedral in Cork, Bishop Colton said the place of religion in Irish society had been placed under the spotlight in the wake of “the harrowing accounts about mothers’ and babies’ homes”.

He said he listened to Liveline twice last week to hear “car-stopping, heart-rending testimony” of women and children who experienced mother and baby homes and he was not in the least surprised at the outbursts of anger against institutional religion.

While he did not agree with some who had called for a boycott of St Patrick’s Day celebrations this year, he acknowledged there was “something curiously unsettling and profoundly challenging” in celebrating Ireland’s national saint and the place of religion in Ireland without acknowledging “mistakes of the past”.

“There is much in our religious legacy to be worked through, and not only in institutional religion in Ireland, but also its relationship with the State, to come to understand, and to be reconciled about, even within ourselves perhaps,” he said.

“Many people, including many people who are religious, find themselves in an emotional heap – a heap that has tilted their world on its axis. We live in times when the relationship of many Irish people with religion is, at best, complicated.”

Bishop Colton recalled how, before he was elected bishop, he preached in his parish in Dublin in 1995 about the church’s attitude to unmarried mothers and their children and he again preached about such attitudes two years ago during a service in Cork.


“Repeatedly, over the years, I have included the church of the day’s attitudes to unmarried mothers and their babies as part of the litany of people who have been wounded by things done in the name of the church and, even more shamefully, of injustices committed in the name of Christ.

“Later that year [2015] I wrote to Judge Yvonne Murphy asking that, in the interim report of her Commission of Investigation, she recommend to Government that the terms of reference of her inquiry be expanded to include Protestant mothers and babies homes also,” he said.

Stressing he was not prejudging or imputing wrongdoing to anyone by seeking to have Protestant mother and baby homes included, Bishop Colton said it was important to acknowledge that the story of institutional religion has not always been one of love and generosity as espoused by Christ.

He recalled that when launching the Cork LGBT Awareness Week in 2014, he noted that slaves, Jews, science, single mothers, children born outside marriage, people in inter-church marriages, divorcees and victims of suicide were among the many to suffer from the prejudices of the institutional church.

Bishop Colton said that “the desire to be instruments of what is right is not the monopoly of one religion or, indeed, of religion at all. It is something that, whatever our background, we share as a matter of the common good.”

But Jesus teaches in the Gospel that people should be compassionate and that was why, “as people reflect on the current love/hate relationship many in Ireland seem to have with religion, that we truly need to know the truth of what happened in the name of religion in the past and to acknowledge it”.

People need “to look around and to ensure that the needs of our own time are truly being addressed and met, and that we do so in a way that is just, generous, wholehearted and compassionate and to ensure that we are not unwittingly or unthinkingly complicit in new atrocities in our own time”.
EDITED BY Sotto Voce