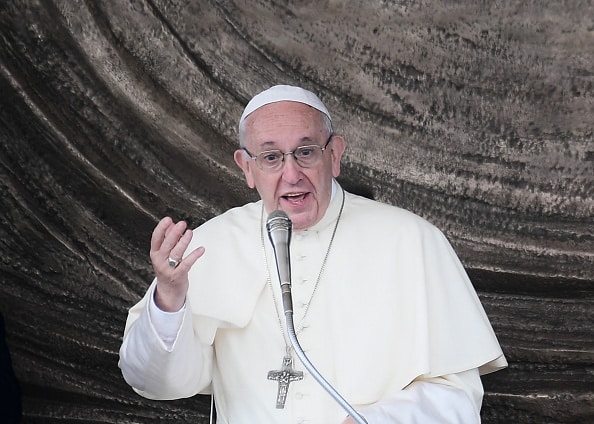 Priests should grant absolution in the confessional even when the penitent has no intention to repent, the Pope has said in a speech which has shocked seminarians.

The Holy Father put aside a written speech, describing it as “boring”, and delivered an off-the-cuff address to seminarians from Barcelona, Spain, in which he frequently used foul language.

In his address, he ordered students for the priesthood “not to be clerical, to forgive everything”, adding that “if we see that there is no intention to repent, we must forgive all”.

“We can never deny absolution, because we become a vehicle for an evil, unjust, and moralistic judgment,” Francis reportedly told the seminarians, who were accompanied by the Auxiliary Bishop Javier Vilanova Pellisa of Barcelona.

Priests who deny penitents absolution are “delinquents”, the Pontiff said, according to the Church Militant website.

If accurate, the Pope’s remarks appear to put him at odds with the moral theology expressed in the Catechism of the Catholic Church which emphasises that contrition occupies the “first place” of any act of a penitent and that it involves “the resolution not to sin again”.

Canon 987 of The Code of Canon Law also says that for the faithful to receive “the saving remedy of the sacrament of penance, they must be so disposed that, repudiating the sins they have committed and having the purpose of amending their lives, they turn back to God”.

According to reports, Francis also used his speech to rant against “f***ing careerists who f*** up the lives of others”.

The Pope also criticised “those who climb to show their a**”, the Italian media outlet Daily Compass reported.

The speech in December was the second time in two months that the Pope has dispensed with a prepared text on the grounds that it was boring.

Speaking to rectors and directors of seminaries in Latin America in November, he allegedly put down a 12-page written speech, saying: “It is a heavy thing, let us read it calmly”, before proceeding to deliver an extempore message, according to Vatican News.

Again, the Pope took issue with the rules about a penitent’s amendment of purpose being a necessary criteria for absolution.

He said that priests should “ask the permission of the bishop” before they dared to withhold absolution from people confessing mortal sins.

“This happens, please!” he said. “Our people cannot be in the hands of criminals. And a priest who behaves like this is a criminal, in every word. Like it or not.”

At the same meeting, Francis insisted that priests and seminarians must practice “closeness” with the laity.

The Pope said: “This must be contagious – that is, the priest, the seminarian, the priest must be ‘close’.

“Close to whom? To the girls of the parish? And some of them are, they’re close, then they get married, that’s fine.”

In his bestseller The Dictator Pope: The Inside Story of the Francis Papacy, author Henry Sire (Marcantonio Colonna) records several instances of the pontiff using expletives, saying he was “prodigal with bad language”.

According to Sire, Fr Peter Hans Kolvenbach, former superior general of the Jesuits, wrote a damning report on Fr Jorge Mario Bergoglio in 1991, accusing the future pope of “a series of defects, ranging from habitual use of vulgar language to deviousness”.