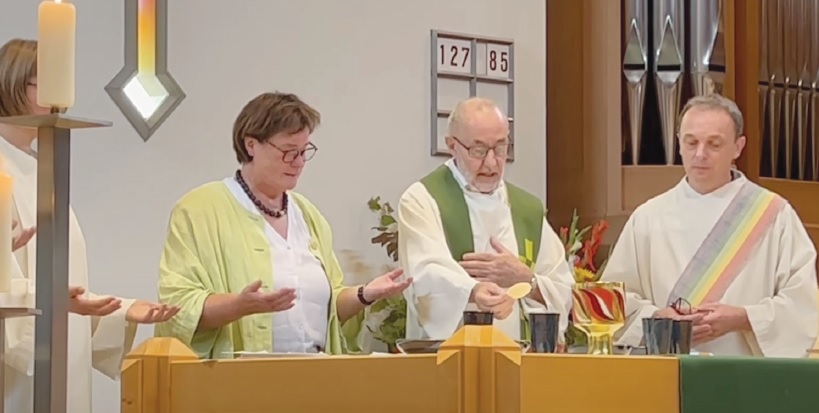 The Catholic bishops of the three German-speaking dioceses in Switzerland — Basel, Chur and Sankt Gallen — have published a letter calling for compliance with liturgical rules regarding the sacramental authority that is attributed solely to the Church’s ordained presbyters (priests).

“You all know that only the priest validly presides at the Eucharist, grants sacramental reconciliation and administers the anointing of the sick,” the three bishops state in the letter, which was issued on January 5.

It is a clear response to what’s come to be known in Switzerland as the “Monika Schmid affair”.

Schmid, who served many years as the de facto administrator of a parish in the Chur diocese, “concelebrated” at a Eucharistic celebration last August to mark her retirement. In the days immediately following, Chur’s Bishop Joseph Bonnemain ordered a preliminary canonical investigation “liturgical abuses”.

Now the new letter — signed by Bonnemain and Bishops Felix Gmür (Basel) and Markus Büchel (Sankt Gallen) — has been seen as a warning to Catholics who may be tempted to introduce unlawful liturgical initiatives.

The letter is addressed to pastoral workers in particular. “We know very well that your work often requires a balance. There is a great gap between what you are burning for, your personal faith, and confronting everything that makes the Church so painfully behind the Gospel,” the three German-speaking bishops say.

Aware of the tensions concerning the place of laity in the Church, they remind the Catholics of their dioceses to rely on the synodal process as the place to discuss ecclesial developments. “We are very grateful for the synodal process, which shows us once again that we are on a journey together and that only together can we be credible witnesses of Jesus Christ,” they write.

They also remind their people of the conditions that are required for valid celebrations of the Eucharist and other sacraments. “Common witness requires common forms and rules. We bishops regularly receive requests and worried reactions: The faithful have a right to religious services that respect the rules and forms of the Church,” they point out.

After underlining the universal character of the liturgy, the bishops insist that these rules “concern in particular those who preside at celebrations. You all know that only the priest validly presides at the Eucharist, grants sacramental reconciliation and anoints the sick. This is precisely why he is ordained. This rule of Roman Catholic faith must be respected without restriction in our dioceses,” they continue.

The bishops insist that they are not trying to defend any sort of “patriarchal clericalism”, arguing that “priests, in the service and execution of the sacraments, make visible that Jesus Christ Himself acts in and through the sacraments. They keep open, as it were, space for God’s action in the liturgy”.

The discipline of the Catholic Church, the three prelates say, requires “a sacramental designation, that is, ordination, to preside at the celebration of the Eucharist and to say the Eucharistic prayer as a concelebrating priest”.

Building on the work of pastoral leaders, the bishops nevertheless recognise some of the demands that lay Catholics are making for a more open distribution of roles.

“We hear the requests of many people to be able to participate in the liturgy in other ways, for example as women. However, we urge you to not make the sign of unity that is the liturgy into a testing ground for personal projects. It is precisely in the worldwide celebration of the same liturgy that we are Catholic and in solidarity with one another,” the three bishops plead.

They point specifically to Pope Francis’ apostolic letter Desiderio Desideravi that insists on the quality of liturgies, inviting Catholics to use “the diversity of forms for liturgical celebrations that the Church offers. And to use places in the liturgy, such as reflection, preaching, meditation, intercessions, songs, music and silence, so that you can be part of it personally”.