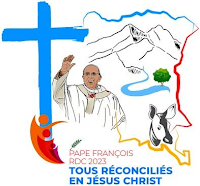 Speaking after Pope Francis’ address to the Diplomatic Corps accredited to the Holy See, His Excellency Deogratias Ndagano Mangokube told Vatican News that Pope Francis' visit to the Democratic Republic of Congo from January 31 will be "a revival and a new breath of air in the life of the Congolese," he said.

The Congolese diplomat first expressed his appreciation to Pope Francis for his constant closeness to the suffering Congolese people who have endured years of armed conflict perpetuated by armed gangs, especially in the eastern region of the country.

The Pope, in his annual keynote discourse to the diplomats, "addressed some of the ills that plague the world while wishing that this new year would be a year of innovation for peace in this world where division and wars seem to multiply," said the ambassador.

I will, at last, be able to go to the DRC

The words that touched the Congolese ambassador the most in the Pope's address were: "I will, at last, be able to go to the DRC ..." When the Pope said those words, Ambassador Ndagano felt particularly moved.

"The expectations of the Congolese people are enormous. Their joy is immense. Pope Francis' arrival in Congo is being prepared for in every locality of the country, not only at the level of the Church or in the capital city, but literally, everyone in the country is preparing for this visit," said the Congolese envoy.

The DRC yearns for peace and he hopes that this Apostolic visit will encourage all those who work for peace in the country with energy to do even more, said the Congolese ambassador. He reassured that the meeting of the Pope with victims of the armed conflicts in the eastern region of the country has been taken care of and would constitute one of the highlights of the Pope's visit to the DRC. The Pope will meet the victims in Kinshasa.

A pilgrimage and plea for peace

Pope Francis re-echoed his concern for the armed conflicts in the eastern part of Congo.

"As you know, at the end of the month, I will, at last, be able to go as a pilgrim of peace to the Democratic Republic of the Congo in the hope that violence will cease in the east of the country, and that the path of dialogue and the will to work for security and the common good will prevail. My pilgrimage will continue in South Sudan, where I will be accompanied by the Archbishop of Canterbury and by the General Moderator of the Presbyterian Church of Scotland. Together we desire to unite ourselves to the plea for peace by the country's people and thus contribute to the process of national reconciliation," said Pope Francis when addressing the Holy See's diplomats.