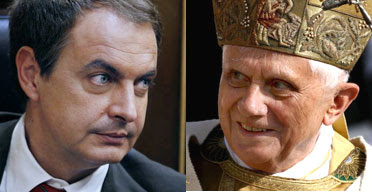 "There are no plans to modify the law in this area," said Zapatero while defending his four-year record in government ahead of the March polls, although he added that his administration was "open to reflection" on the issue.

Abortion has been de-criminalised in Spain, since 1985, in only three specific sets of circumstances: for rape victims (within 12 weeks); where there are foetal deformities (22 weeks); and when "the mother's physical or psychological health is in danger" (with no time limitation).

The vast majority of 91,000 abortions reported in 2005 were attributed to "psychological" health risk, sometimes performed after six, seven or eight months' pregnancy.

With a premiership marked by battles with the Roman Catholic Church and the country's conservative right on gay marriages or religious teachings, Zapatero's socialist party has decided to remove abortion reform from its election manifesto, despite the issue figuring in its 2004 programme.