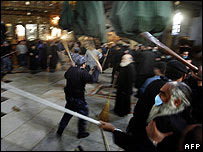 Members of rival Christian orders have traded blows at the Church of the Nativity in Bethlehem, with four people reported wounded in the fray.

Greek Orthodox and Armenian Apostolic priests were sweeping up at the church following the Christmas rites of the Western churches earlier in the week.

Intense rivalries at the jointly-run church can set off vicious feuds.

The basilica, built over the grotto in the West Bank town that is the reputed birthplace of Jesus Christ is shared by Roman Catholic, Greek Orthodox and Armenian religious authorities.

Palestinian police formed a human cordon to separate the battling dark-robed and bearded priests and deacons, said to number about 80, so that cleaning could continue.

Thousands of tourists visited the church for the Western Christmas celebrations this week, the first time municipal authorities reported a successful pilgrimage season since the outbreak of the Palestinian intifada in 2000.

The Eastern or Orthodox Christian Church celebrates Christmas in the first week of January.

The floors, walls and rafters of the Church of the Nativity are scrubbed and swept by Orthodox priests between the two festivals.