St. Paul’s returns to its roots with Celtic Eucharist 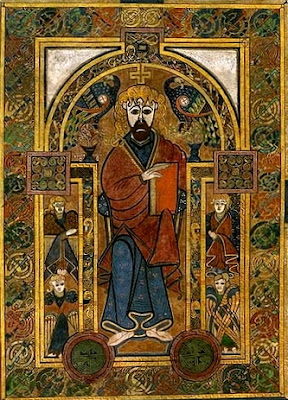 Those driving by St. Paul’s Episcopal Church on East High Street may have noticed a banner on the antique iron fence that announced Celtic Eucharist services.

Some may have puzzled over the two, apparently dissimilar, words used in such a combination.

“A Celtic Eucharist,” said the Rev. Julian Eibin, rector of St. Paul’s, “tries to take advantage of some aspects of Celtic spirituality. It’s designed to give someone the ability to take a deep breath. The prayers come out of Celtic tradition ... they’re reflective and meditative.”

When Eibin refers to “Celtic” — which is pronounced with a hard “k,” — he is speaking of the ancient people of the northern British Isles, the ancestors of the modern-day Irish and Scots, in the 4th through the 7th centuries.

They were introduced to Christianity by the missionary now known as St. Patrick, who didn’t drive the snakes out of Ireland, but who did change the course of history by evangelizing the British Isles.

For Celtic Eucharist, Eibin uses Celtic prayers from the Stowe Missal, a prayer book that dates back to those ancient days, and begins the service with a recitation, set to music, of the beautiful poem-prayer known as “The Breastplate of St. Patrick.” It begins with these words: “I arise today/Through the strength of heaven/Light of sun/Radiance of moon/Splendor of fire/Speed of lightning ....” It includes the famous recitation, which reads almost like an incantation: “Christ with me, Christ before me/Christ behind me, Christ in me ... Christ when I arise, Christ to shield me ....”

“We’ve never done a Saturday evening service,” said Eibin. “We chose Saturday for those who can’t come to church on Sunday, but also for those who feel really rushed. The service aims at creating a contemplative or meditative feel.”

And what is the Celtic connection to the Episcopal church?

“It is our roots,” explained Eibin. “The oldest record of the Christian community in England dates back to the Celts. Patrick, the great missionary to Ireland, was English. Celtic missionaries from Ireland founded monastic communities such as Iona in Scotland and Lindisfarme in Northern England in the 8th and 9th centuries.”

In the 15th century, Eibin explained, King Henry VIII broke away from the Roman Catholic church and declared himself head of the Anglican Church in England.

“There was an awful lot of blood being spilled over religion in those days,” said Eibin. “Then Queen Elizabeth said ‘enough’ and, in what is known as the Elizabethan Settlement, the church began to be defined as both Catholic and Protestant.”

The Church of England came to America with the Colonists, especially in Virginia, however, by the time of the American Revolution, there eventually was a theological split between loyalists and revolutionaries.

“The Episcopal church became the way the Anglican church continued its way in America after the American Revolution,” said Eibin, “and continues to be the ‘via media,’ the middle road between Catholicism and Protestantism.”

The formal Episcopal church was founded and named in 1789 at a convention in Philadelphia. The word Episcopal means “governed by bishops.”

“We always try to seek out a way that cherishes that heritage, but we aren’t bound by it. I think there’s a great hunger in our culture and our society for the kind of spirituality that is rooted in Celtic spirituality. There’s a sense of God enveloping us, experiencing God in all of life, in all aspects of life. It connects us deeply to the holy, but also to the holy in the midst of everyday life.”