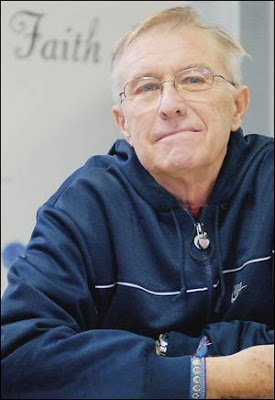 Christmas came two days early this week for parishioners of Our Lady of the Rosary Church when their beloved priest, Father Al Gondek, was allowed to return to the parish cleared of allegations that he sexually abused a boy at a summer camp in 1960.

"We never had any questions (about his innocence)," said Kris Joss, a member of the parish council. "It was never if he comes back, it was when."

For Gondek, it has been the most trying time of his life, he said, while sitting with several members of the council Wednesday afternoon in the parish center.

A testament to forgiveness, he and his parishioners said they hold no ill will against the accuser and instead pray for him.

Gondek said he would always be thankful for the outpouring of support from not only his parish members, but also the entire Davidson County community.

"It's overwhelming," he said of the support.

Gondek was placed on administrative leave Oct. 12 by the Diocese of Charlotte after 59-year-old Michael Sowden of Wilmington, Del., said Gondek fondled him while swimming when he was a boy at a summer camp in Maryland.

Gondek's 300-member congregation stood solidly behind him during the ordeal, defending his reputation as a righteous man who could never be guilty of such an act.

The allegations were investigated by his religious order, the Oblates of St. Francis DeSales, and an inquiry was conducted by the Review Board of the Diocese of Charlotte.

The Oblates contracted with Chief Judge Joseph H.H. Kaplan of Baltimore, Md., to conduct the investigation.

Kaplan has no connection to the church, the diocese or the Roman Catholic Church.

Sowden's attorney alleged in a news release in October that Sowden was fondled by Gondek while swimming at the camp in 1960. The investigation showed, however, that the camp did not open until 1961 and Gondek was not assigned there until 1962.

Furthermore, the retired judge's investigation and an independent polygraph of Gondek showed the priest does not know how to swim.

"Right after Father Al left, we served the homeless a meal, which we do the first Sunday of each month," said Joss, referring to the day Gondek departed the parish to stay at his Oblates' seminary in Washington, D.C., during the investigation. "They kept coming up to us and told us they were so sorry this had happened. They said they knew Father Al and he could not have done what he was accused of."

To show how much support he received in Lexington from people outside his church, a parish member shared with him a recording of a sermon by the Rev. Dr. Ray Howell III, senior minister of First Baptist Church on West Third Avenue.

Others with whom Gondek has served on many community boards and commissions also offered their support with cards and letters to him and in defense of him to the diocese's bishop. Gondek has served on the Lexington Human Relations Commission for eight years and is a past president of the Lexington Area Ministerial Association. In addition, he is an active participant in the Latino Roundtable, a group of community members who discuss ways to bring the growing Hispanic population here into the mainstream community. He also is a member of the Davidson County Juvenile Crime Prevention Committee.

"I received mail from people I didn't even know," Gondek said.

On Friday, parish council members received an e-mail from David Hains, communications director of the Charlotte Diocese, that read that Bishop Peter J. Jurgis would meet with them Sunday after Mass to discuss the investigation. The e-mail did not mention that Gondek was coming home and the investigation had cleared him of wrongdoing.

"We hoped, but we didn't know if he was coming," Joss said. "We've been praying very hard."

When Gondek walked into he church with the bishop Sunday, church members burst into applause.

"There were tears, too," said Lisa Grondy, a parish council member. "My daughter, Katie, has cried her eyes out. It was an answered prayer for her."

Added Joss: "Everybody has wanted to grab him and never let go."

When Gondek left Lexington for Washington in October, he was told to pack for two weeks. The weeks turned into months. Prayer got him through those dark hours, he said.

"I was just relieved," he said of getting a call from his superior that the investigation was over. "It's been a painful journey."

He spent his time at the seminary praying and attending three masses each day.

On Sunday, Jan. 6, the church has planned an open house called an "Answered Prayer Celebration" at the parish center to welcome Gondek home. The event, to which the public is invited, will take place from 3 to 6 p.m. at 711 S. Main St.