Pope's calendar in 2008 confirms life doesn't slow down after 80 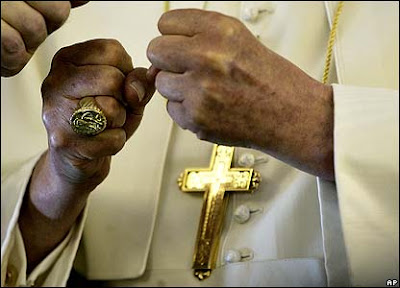 As Pope Benedict XVI looks at his 2008 calendar, he's no doubt recognizing that life doesn't slow down after 80.

With three foreign trips, a world Synod of Bishops on the Bible, a jubilee year dedicated to St. Paul, an important dialogue with Muslims, and an encyclical and a new book in the works, 2008 is shaping up as perhaps the busiest year of his pontificate.

The pope will celebrate his 81st birthday in Washington April 16, the day he's scheduled to meet with U.S. President George W. Bush at the White House and with U.S. bishops at the Basilica of the National Shrine of the Immaculate Conception. There's bound to be a birthday cake somewhere along the way.

The April 15-20 trip to the United States and the United Nations will be the pope's first journey outside Italy in 2008. In Washington, the pope also is expected to say Mass in the Nationals' baseball stadium and hold meetings with educators and ecumenical leaders.

In New York, in addition to his U.N. visit, the pope's tentative schedule includes a meeting with interreligious representatives, Mass in St. Patrick's Cathedral, an encounter with seminarians, a visit to ground zero and Mass in Yankee Stadium.

In late July the pope will travel to Australia -- by far the longest trip of his pontificate -- to preside over World Youth Day celebrations. Sometime during the year, he's expected to visit Lourdes, France, to mark the 150th anniversary of Marian apparitions there.

Meanwhile, the pope also has made plans for several major trips inside Italy, beginning with the Ligurian seaports of Genoa and Savona in mid-May. In Savona, which hasn't hosted a pope since 1815, the announcement of the pope's visit was front-page news.

In mid-June, the pope will visit the southern Italian region of Puglia, and in early September will make a one-day stop on the island of Sardinia.

On June 28, Pope Benedict plans to inaugurate the "year of St. Paul," which will feature liturgies, conferences and ecumenical encounters in Rome and around the world. The pope wants modern Christians to draw inspiration from the apostle's missionary energy, and that's a theme he'll be talking about in coming months.

The Synod of Bishops runs Oct. 5-26 on the theme, "The Word of God in the Life and Mission of the Church." The pope chose the topic of Scripture, and he is expected to follow the proceedings closely. The synod's working document is due out earlier in the year.

The pope is himself working on at least one document, a new encyclical that addresses social issues. There's no target date, but officials expect it during the first half of 2008.

And sources said the pope is continuing to work on another project dear to his heart: the second volume on the life of Jesus, following publication of "Jesus of Nazareth" last spring.

Day to day in 2008, much of the pope's time will be taken up by rounds of "ad limina" visits made by heads of dioceses, audiences with world leaders and speeches to ambassadors. He'll welcome Mary Ann Glendon as the new ambassador of the United States, as well as new representatives from Israel and Iran.

In early January, the Jesuits are gathering to elect a new superior general. The pope will meet with delegates of the order and their new leader in February.

In ecumenical affairs, 2008 marks the 100th anniversary of the Week of Prayer for Christian Unity, and the pope is expected to preside over a prayer service marking the centenary.

Muslim representatives are coming to the Vatican early in 2008 to lay the groundwork for a potentially important dialogue with the Vatican. The pope had invited a group of Muslim scholars to meet with him and with the Pontifical Council for Interreligious Dialogue.

Other Vatican agencies will be hosting important meetings during the year. The Pontifical Council for Justice and Peace has proposed a series of international conferences on social development issues such as poverty, corruption, disarmament, prisons and the ethics of taxation.

Sometime early in the year, the Pontifical Commission "Ecclesia Dei" plans to issue a document clarifying questions that have arisen regarding the pope's 2007 document relaxing restrictions on use of the Tridentine Mass. Sources said the pope personally is interested in removing ambiguities, and will sign off on the new document.

In April, Pope Benedict's pontificate enters its fourth year. He gradually has replaced top aides, and that's bound to continue. Six Roman Curia heads are already at the normal retirement age of 75 or will reach it in 2008.