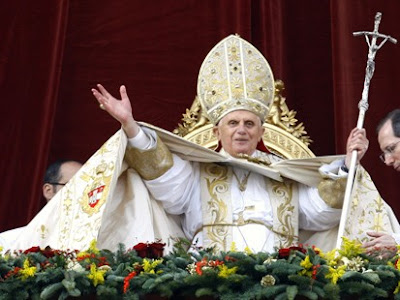 Pope Benedict XVI spoke in sixty different languages, but he had one message: to wish the world a merry Christmas.

Dressed in white and gold embroidered robes, he delivered the traditional Urbi et Orbi address from his balcony window.

Men, women and children of different races, ages and nationalities gathered in St. Peter's Square to listen to the address.

The Pope urged people to accept the light of Jesus Christ into their lives. He appealed for solutions to conflicts raging across the world in Iraq, Darfur, Afghanistan and the Middle East. And he made an appeal for environmental protection.

The Pope ushered in the third Christmas of his reign last night, leading the world's 1.1 billion Roman Catholics in midnight mass. Some ten thousand people participated in the elaborate ceremony in St. Peter's basilica.

In his homily the Pope called on people to aside time in their lives for God and for the needy. He compared what he called the modern world's rejection of God, to the story of Jesus's birth in a manger, because there was no room for Mary and Joseph in the inn.

Those who were unable to fit in the basilica watched on large screens from outside in St. Peter's Square which was made festive by a towering, twinkling Christmas tree and a life-size nativity scene.

This year's nativity scene was depicted as a recreation of Joseph's home in Nazareth and not as the traditional manger in Bethlehem. Officials at the unveiling said that the change represented the idea that Jesus was not born in any one place and that he is everywhere for everyone.