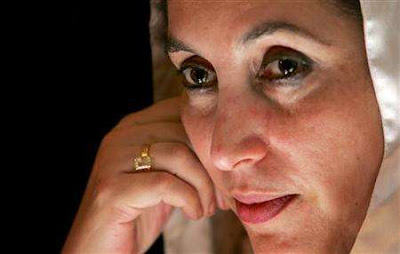 Pakistani opposition leader Benazir Bhutto was assassinated on Thursday as she left an election rally in the city of Rawalpindi, putting January 8 polls in doubt and sparking anger in her native Sindh province.

State media and her party confirmed Bhutto's death from a gun and bomb attack.

"She has been martyred," said party official Rehman Malik.

Bhutto, 54, died in hospital in Rawalpindi. Ary-One Television said she had been shot in the head.

News of her death brought a swift and angry reaction from supporters in Sindh and its capital, Karachi, where fires were set, shots fired and stones thrown.

"Police in Sindh have been put on red alert," said a senior police official. "We have increased deployment and are patrolling in all the towns and cities, as there is trouble almost everywhere."

President Pervez Musharraf condemned "in strongest possible terms the terrorist attack that resulted in the tragic death of Bhutto and many other innocent Pakistanis", the state news agency said.

"The president convened a high-level emergency meeting ... soon after the tragic development.

"He urged the people to stay calm to face this tragedy and grief with a renewed resolve to continue the fight against terror," the APP news agency said.

The assassination, 13 days before an election which Bhutto had hoped to win, throws up huge questions for this nuclear-armed U.S. ally already struggling to contain Islamist violence.

Musharraf, whose popularity has slumped this year, could decide to postpone the vote and reimpose a state of emergency that was only lifted on December 15 after six weeks.

"It does cast a shadow over the election and it raises some concerns over how the government might deal with any popular reaction to this," said Jennifer Harbison, head of Asia Desk at Control Risks, London.

"There is the potential that her supporters could take to the streets and that is something that will be difficult for the government to address without at least considering a return to emergency rule."

Police said a suicide bomber fired shots at Bhutto as she left the rally venue in a park before blowing himself up.

"The man first fired at Bhutto's vehicle. She ducked and then he blew himself up," said police officer Mohammad Shahid.

Police said 16 people had been killed in the blast, which occurred during campaigning for the national election. A Bhutto party spokeswoman, Sherry Rehman, was hurt in the attack.

"It is the act of those who want to disintegrate Pakistan because she was a symbol of unity. They have finished the Bhutto family. They are enemies of Pakistan," senior Bhutto party official Farzana Raja told Reuters.

Bhutto's father, Zulfikar Ali Bhutto, was Pakistan's first popularly elected prime minister. He was executed in Rawalpindi in 1979 after being deposed in a military coup.

A Reuters witness at the scene of the attack said he had heard two shots moments before the blast. Another Reuters witness saw bodies and a mutilated human head strewn on a road outside the park where she held her rally.

"In her death the subcontinent has lost an outstanding leader who worked for democracy and reconciliation in her country," said a spokesman for Prime Minister Manmohan Singh.

U.S. President George W. Bush condemned Bhutto's killing. A spokesman said he would make a statement at 1600 GMT. A State Department official said: "The attack shows that there are still those in Pakistan trying to undermine reconciliation and democratic development in Pakistan."

In France, Foreign Minister Bernard Kouchner condemned what he called "this odious act" and paid tribute to Bhutto as an eminent figure in Pakistani political life.

It was the second murderous attack on Bhutto in under three months. On October 19 a suicide bomber killed nearly 150 people as she paraded through Karachi on her return from eight years in self-imposed exile.

Islamist militants were blamed for that attack but Bhutto had said she was prepared to face the danger to help the country.

Speaking on Thursday, Bhutto had told of the risks she faced.

"I put my life in danger and came here because I feel this country is in danger. People are worried. We will bring the country out of this crisis," Bhutto told the Rawalpindi rally.

People cried and hugged each other outside the hospital where she died. Some shouted anti-Musharraf slogans.

Another former prime minister and opposition leader, Nawaz Sharif, spoke to the crowd.

"My heart is bleeding and I'm as grieved as you are," Sharif said.

On international financial markets, gold and government bonds rose while U.S. stocks fell in part on news of the assassination.

Analysts say the shock of the Bhutto news triggered a classic capital flight to assets which are considered as safe havens in times of geopolitical stress.

Bhutto became the first female prime minister in the Muslim world when she was elected in 1988 at the age of 35. She was deposed in 1990, re-elected in 1993, and ousted again in 1996 amid charges of corruption and mismanagement.

She said the charges were politically motivated but in 1999 chose to stay in exile rather than face them.

Bhutto's family is no stranger to violence.

Apart from her father's execution, both of her brothers died in mysterious circumstances and she had said al Qaeda assassins tried to kill her several times in the 1990s.