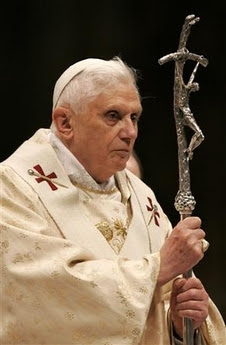 Christian leaders like Pope Benedict XVI, along with other religious and political figures around the world, delivered messages of hope and peace on Christmas Day.

At the Vatican, the Pope used his Christmas Day address Tuesday to call for the end of bloody conflicts in Darfur, Iraq, Afghanistan and Congo.

Benedict, delivering his traditional "Urbi et Orbi" speech -- Latin for "to the city and to the world" -- urged political leaders to find the "wisdom and courage" to end the ongoing conflicts.

Thousands of worshippers gathered to hear the Pope speak from the central balcony of St. Peter's Basilica.

Benedict told the crowd to rejoice over the birth of Jesus Christ, which he hoped would bring comfort to all those "who live in the darkness of poverty, injustice, and war."

In her Christmas message to Commonwealth nations, Queen Elizabeth II also urged people to think of the needs of the vulnerable and disadvantaged.

"Each one of us can also help by offering a little time, a talent, or a possession, and taking a share in the responsibility for the well-being of those who feel excluded," she said.

The Queen also praised the value of family, saying, "In my experience, the positive value of a happy family is one of the factors of human experience that has not changed."

Meanwhile, the Archbishop of Canterbury, Rowan Williams, the head of the Anglican Church, called on his 77 million followers to protect the environment. He said he feared that "human greed" threatened the planet's fragile balance.

Many leaders also expressed their desire to see an end to international violence.

Christian pilgrims from around the world used the recent launch of peace talks between Israelis and Palestinians to visit the Holy Land, particularly Bethlehem. At the Church of the Nativity, worshippers kissed the altar built on the spot where Jesus is believed to have been born.

During Midnight Mass there, Latin Patriarch of Jerusalem Michel Sabbah told Christians to appeal for peace. He also called for independence for Palestinians, saying to those who attended the service that they should do as Jesus preached and "not be afraid."

In Iraq, where a suicide bombing claimed almost two dozen lives, there was a small, but significant, glimmer of hope.

Both Sunni and Shiite Muslim clerics attended a Christmas Day service at the Mar Eliya (Chaldean Catholic) Church in Baghdad. They said they were there as a sign of unity.

Worshippers in Baghdad held their Christmas Eve midnight mass at mid-day on Monday, as it is too dangerous to be out after dark there.

And from high above Earth, astronauts at the International Space Station offered a unique perspective.