For the first time in years, a cheerful Christmas in the town of Jesus' birth 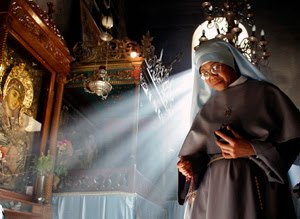 Encouraged by renewed peace talks between Israel and the Palestinians, Christian pilgrims from around the world converged on Jesus' traditional birthplace Monday to celebrate Christmas — a palpable contrast to the sparse crowds of recent years.

"I'm Catholic. I always wanted to see the beginning of Christianity, the whole history. It's something you grow up with," said Kristin Obeck, a 37-year-old schoolteacher from Richmond, Va.

Despite the festive atmosphere, a heavy police deployment, the presence of Israel's massive separation barrier and unease among Bethlehem's ever-shrinking Christian population served as reminders of the lingering tensions in the region.

In his Christmas homily during Midnight Mass, Latin Patriarch Michel Sabbah delivered a politically charged appeal for peace and love in the Holy Land — and independence for the Palestinian people.

"This land of God cannot be for some a land of life and for others a land of death, exclusion, occupation, or political imprisonment," said Sabbah, the first Palestinian to hold the position of top Roman Catholic official in the Holy Land.

In his homily, Sabbah criticized religious extremists and lamented the dwindling number of Christians. "To all of you Christians in this land, you who are tempted to emigrate, you who are the object of everyone's preoccupation, I say to you what Jesus told us: Do not be afraid," he said.

In the years following the 1993 Oslo peace accord, Bethlehem attracted tens of thousands of tourists for Christmas. But the number of visitors plummeted after the outbreak of the second Palestinian uprising in 2000.

Tourism has begun to recover in recent years as fighting has slowed. This year, it got a boost from the renewal of peace talks last month at a summit in Annapolis, Md.

While many celebrants appeared to be curious teenagers and other local residents, Israeli tourism officials said they expected some 20,000 visitors to cross from Jerusalem into neighboring Bethlehem. They said that was an increase of about 50 percent over last year, though well below the peak years.

Tourism workers handed out sweets and flowers to pilgrims, and smiling Israeli soldiers posed for pictures with travelers.

Bethlehem's governor, Saleh Tamari, said all of the town's 5,000 hotel rooms were booked.

"If you can't be with family, it's good to be here where it all went down," said 23-year-old David Collen of Hickman, Neb., who is studying the Middle East at Tel Aviv University in Israel.

Tiago Martins, 28, from Curitiba, Brazil, said the new peace talks had prompted him to visit Bethlehem for the first time.

"The idea that it's a Christian city makes me more calm, and I think going to the West Bank is more comfortable since Annapolis," Martins said.

Priests and monks, tourists, Palestinian families and police mingled in Manger Square outside the Church of the Nativity, the site where tradition holds Christ was born.

A four-story cypress tree, strung with lights and red and gold ornaments and topped with a yellow star, towered outside the church.

Children strolling through the square wore red-and-white Santa Claus hats, with some in full Santa regalia. Balloons bobbed from vendors' stands and strings children clutched in their hands. After nightfall, the square was lit in a sea of red and yellow lights and Christmas stars.

"This year is much better than the last seven years for tourism," said shopkeeper Jacques Aman, whose wooden handicrafts shop offered crosses, rosaries and nativity scenes. "The atmosphere is better in general. There is relative calm, from the security standpoint."

Palestinian scouts, some wearing kilts and berets adorned with pompons, marched through the streets playing drums and bagpipes. Throughout the evening, choirs and orchestras performed hymns and Christmas carols in a multitude of languages.

Speaking to reporters as he came out of prayers at a Bethlehem mosque, Palestinian President Mahmoud Abbas expressed hope that the renewed peace talks will bring about a Palestinian state in the coming year.

Sabbah began Christmas celebrations with his annual procession from Jerusalem to Bethlehem. He could only enter Bethlehem after passing through a massive steel gate in Israel's separation barrier — a stretch of concrete slabs built to keep suicide bombers from reaching Israel. Israeli mounted policemen escorted Sabbah, in his flowing magenta robe, to the gate, and border police clanged it shut behind him.

The barrier was just one of the reminders of the area's lingering troubles.

Hundreds of police were deployed in Manger Square and on neighboring rooftops, and before celebrants started flowing in, bomb squads walked through the streets sweeping cars and buildings for explosives.

Years of violence with Israel, infighting among rival Palestinian factions and economic hardship caused by the barrier have all contributed to the departure of a growing number of Christians from Bethlehem. Officials say from 35 to 50 percent of the town's 40,000 people are Christian, compared to 90 percent in the 1950s.

Johnny Giacaman, a Bethlehem native who now lives in the United Arab Emirates but returned this year to visit his family, is among the people who have left.

"There is nothing for young people here," he said, standing outside his family's gift shop. "Christians are leaving in high numbers. I am an example. If this continues, in five to 10 years the Church of the Nativity will be a museum."

In the impoverished Gaza Strip, festivities in the tiny Christian community of 3,000 were decidedly muted. Christians kept a low profile following the killing of a prominent Christian activist in the wake of the Islamic militant group Hamas' takeover of the area. Hamas has denied involvement.

Bethlehem is just as much the birthplace of Jesus NEXT week as it is this week. Yet next week, and probably already, the place will be almost empty.

I've seen the same at Holy Sepulchre in Jerusalem - throngs for Holy Week and by Easter Tuesday the place is empty.

Please visit the Holy Land and support the Christians there. It is possible to find good pilgrimages which celebrate the Christians in the holy places. If ibn doubt, consult Pax Christi who I'm sure will make suggestions that suit.