Faithful show resolve at service with no priest 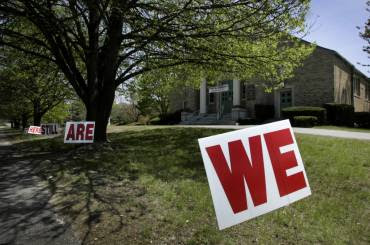 More than 200 parishioners sang and prayed last night at St. James the Great's Christmas Eve service. One important element was missing: a priest.

The Boston Archdiocese has slated the church for closing and decided not to send a priest for Christmas Eve this year, as it has done for the past three years.

St. James is one of several parishes that have maintained vigils in opposition to proposed closings, which the archdiocese announced several years ago in response to dwindling membership and financial issues.

St. James is one of several parishes without a priest on Christmas. Saint Jeremiah in Framingham also held its first Christmas Eve service without a priest, said Peter Borre, cochairman of the Council of Parishes, a group that formed in 2004 to oppose church closings. Saint Frances Xavier Cabrini in Scituate has been denied a priest to lead a Mass on Christmas and Easter the past three years, according to Jon Rogers, a member of that parish.

St. James parishioners had found a priest to lead Christmas Eve Mass, but he canceled, said Suzanne Hurley, a longtime member who has slept at the church to protest its closing.

She suspects he did so under pressure from the archdiocese. "They found out and put an end to it," she said.

The Archdiocese of Boston's offices closed at 11 a.m. yesterday, and officials could not be reached for comment.

Lay people led last night's service, as they have since the announcement in 2003 that the church would close.

Members have appealed the plan to close the church to higher church authorities and have filed a civil lawsuit in US Supreme Court, Hurley said. Parishioners are paying for the building's upkeep.

There were few signs the parish was fading last night.

Nearly two-thirds of the pews were filled, incense burned, and an organist played Christmas songs. Candles filled an altar decorated with poinsettias. Children were dressed as shepherds, kings, and lambs for the annual Christmas parade and reenactment of the birth of Christ in Bethlehem.

Eucharistic ministers gave communion, the taking of bread and wine consecrated by a Catholic priest. Last night's communion bread was consecrated by priests from other parishes and brought to St. James before the service, church members said.

Geraldine Cimino of Wellesley said she has been a member of the parish for four years. Last night, she said she prayed that the diocese would send a priest. But she also thought last night's service was as good as ever.

"In my heart, as a Christian and a Catholic, and no matter where I am, God is always there," she said.

Mark Fahey attended with his wife and three children.