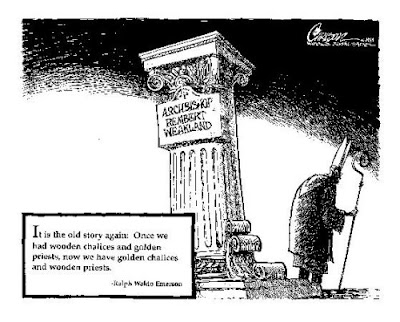 As a Catholic, two doctrinal issues that worry me and I think many other faithful, are confession and celibacy.

Catholics usually go to the priest and confess their sins before those sins can be forgiven by God.

The dilemma of the confessor, beside the psychological crisis it induces, is that some of the sins, assuming the confessor had many, will one way or the other crop up again.

At times it can happen as you are going home to continue to dwell in your newfound state of grace, which the catechist keeps repeating before Holy Communion every Sunday as if the faithful are not aware of such inhibiting proviso.

If such happens as they are bound to happen, the confessor will rush to the priest again and pass through the same ritual stating the sins committed and their frequency to regain his holiness, sometimes to the consternation of the priest who keeps memory diary of the confessors.

The church has been trying over the years to justify this mode of confession, which is psychologically wrecking to the extent that some sins are deliberately left out while some tolerable ones are eloquently pronounced to the hearing of the priest who is not tired of hearing those evil deeds.

A fictional representation of this inherent abuse in Catholic confessionals can be gleaned from Mongo Beti’s Poor Christ of Bomba.

I have taken up this issue with some Catholic priests, both blacks and whites, and all of them acknowledge this weak angle of confession but insisted that it is liberating and somehow emotionally satisfying.

Some Catholics do not like it but are just keeping face; after all it is God that will be the ultimate judge in the last day and not the priest or any other person.

Beti also touched on the inherent abuses of celibacy, which I will dwell on in the latter part of this article. But each Sunday in our local church where I worship in Lagos, the numbers of those who come out for Holy Communion keep decreasing when compared to the number of the congregation.

I believe that the dwindling number of communicants is an indication of the general disapproval of the mode of confession.

I would be glad to learn the contrary and perhaps other views on this. This brings to the fore the need to change the Catholic mode of confession which is not only un-African but also does not allow the whole truth to be told in some circumstances.

The current mode, which calls for modification, is rather inhibiting, unnecessary and not liberating or emotionally satisfying.

During the Biafran war, the white priest then administered general absolution type of confession. What it entails is that you confess your sins to God directly wherever you are in the church and the priest grants all of you general pardon.

This practice remained a little after the war but it was popular among the white priests than our black priests.

It is economical, time saving and emotionally and psychologically rewarding than the current face- me- I- face-you type of confession where the priest will listen to every detail of your life before granting the needed pardon. It will lead to total confession. It is even more African and will ultimately lead to confessing everything to God because they are meant for God’s ears and it is God that really forgives those sins.

I wish the church should consider changing to the general absolution because the current method appears not to be working well with us. Many Catholics have run to other churches because of this and celibacy.

The church hierarchy cannot continue to pretend that all is well with the way Catholicism is practised here in Africa. Just as the church has allowed some clapping of hands, dancing and Igbo songs and instrumentation in its worship to stem the intrusion of Pentecostalism, it must do something urgently about confession and celibacy.

Confession and celibacy are some of the themes well portrayed in Purple Hibiscus, a novel by Chimamanda Ngozi Adichie. It also mirrors other inhibiting sides of Catholicism in the face of Igbo traditional religious life and the threatening Pentecostalism.

Does it worry the priest that not many Catholics receive the Holy Communion, which many regard as a badge of holiness and a sure visa to heavenly bliss? Every Sunday, the congregation is irritated to a point of rejection by the singing of this phrase, which has become a ritual by the catechist, “this is time for Holy Communion. Only practising Catholics in a state of grace are allowed.” Another variant will add, “Married but unwedded couples are not allowed to receive Holy Communion.”

The irony of the catechist’s pronouncement is that during offering times, which these days, are becoming so many in Catholic church, the same catechist would insist that everybody should file out and contribute. At times, this is done line-by-line beginning with those at the back to those in front.

In this wise, everyone partakes irrespective of the state of his or her soul but during the life-saving spiritual meal, the Holy Communion, there is segregation. Why? This contrasts sharply with the practice in African traditional religion, which the Catholic Church supplanted in most parts of Igbo land. In the traditional religion, everybody partakes of the ritual meals even non-adherents and visitors.

Jesus Christ during his earthly ministry fed, on different occasions, five thousand and ten thousand people respectively, without any discrimination. Also during his last supper, which is the origin of modern day Holy Communion, his twelve disciples partook of the eating of his flesh and drinking of his blood including his betrayer, Judas Iscariot. If Judas was found worthy of such heavenly meal, why do the Catholic clergy exclude some members in their own bread and wine?

I believe that those whose offerings to the worthy causes of the church are acceptable should also be worthy and acceptable to the church’s ritual meal called Holy Communion.

Some people might wonder why my interest in celibacy since I am a laity. I am highly interested because I would have been involved if not for celibacy.

I am also concerned if such vow is desecrated.

Outside my intellectual pursuit which has remained my primary goal and one that has shaped my professional calling and outlook, the Catholic priesthood holds much attraction to me and I think to some others too.

But the issue of imposed celibacy is a barrier to many for not undertaking the vocation for fear of abuse. I am worried for those in this dilemma of faith and those inside that daily compromise their celibate vows as if there is nothing to worry about.

The question now is: Why are full-blooded, virile young men and women allowed to take a vow of celibacy that is church imposed and which some of them do not keep?

Won’t the church make such a vow optional for its priests considering the inherent abuses by randy priests?

The females who partake in these vows are not immuned from such sexual escapades. Stories of such abuse are rampant in the foreign and local media. These scandals should worry the church.

In some instances, it has been taken as normal.

Celibacy practised by St. Paul as recorded in the Bible was self-imposed. It was his choice. He recommended it to only those who can do it faithfully and advised otherwise to those who are weak in the flesh to marry and enjoy sex.

Can a Catholic clergy enjoy sex? The answer is why not.

Is he or she not human?

But is a Catholic clergy allowed to have sex? The answer is no, because he made a vow of celibacy which forbids any form of sex.

My thesis in this write-up is that the Catholic church should, in a competing world that has become a global village and where knowledge through the Internet is the property of all at the press of a button, revert to the general absolution style of confession or allow the confessor confess to God in his house without troubling to see the priest.

Secondly, they should abrogate celibacy for its clergy or make it optional if it still wants to make the priesthood attractive to the young.