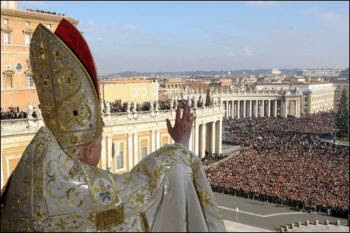 Pope Benedict XVI lamented the "grim sound of arms" in the world's conflict zones Tuesday in a message of peace echoed by other Christian leaders as they celebrated Christmas.

Delivering his traditional blessing to thousands of worshippers in St Peter's Square in Rome, the head of the world's 1.1 billion Roman Catholics said: "On this day of peace, my thoughts turn especially to those places where the grim sound of arms continues to reverberate."

He emphasised "the whole of the Middle East -- especially Iraq, Lebanon and the Holy Land", and singled out Darfur, Somalia, Democratic Republic of Congo and "many other crisis situations that unfortunately are frequently forgotten".

On Christmas eve, the Catholic leader in the Holy Land, Latin Patriarch Michel Sabbah, had also pleaded for peace in the Middle East.

"This land of God cannot be for some a land of life and for others a land of death, exclusion, occupation, or political imprisonment," he said in a sermon for midnight mass in Bethlehem, where Jesus was born.

"All those whom God, the lord of history, has gathered here must be able to find in this land life, dignity and security," he said, addressing thousands of Christians from all over the world in a sermon delivered in his native Arabic.

Palestinian president Mahmud Abbas attended the mass fresh from last month's meet in the US city of Annapolis, where he formally relaunched the peace process with Israel's Prime Minister Ehud Olmert.

Midnight mass is nothing more than a memory for Christians in Baghdad where danger is ever present.

The last one was celebrated four years ago, before the American invasion in 2003. A mass is now held at dusk on Christmas Eve, and another on the morning of Christmas Day.

In Roman Catholic-dominated Philippines, Cardinal Gaudencio Rosales urged the government in his Christmas message to address injustices suffered by the country's millions of poor.

"Our prayer and pleading, like a Christian prayer of hope and peace, is for the poor to be paid more attention to in our Christian country's economy and laws. This will eventually bring peace to everyone," he said.

In Indian Kashmir, Muslims joined several hundred Christians at a mass on Tuesday and offered prayers for peace to return to the troubled region.

"I felicitate the community on the occasion of Christmas and pray for an end to violence," Kashmir's Deputy Chief Minister Muzaffar Hussain Baig said.

Thousands also celebrated Christmas by praying for peace across India's insurgency-wracked northeast which has a large Christian population.

"Hundreds of thousands of people have been affected by the devastating Cyclone Sidr," Archbishop of Dhaka Poulinus Costa said.

"Many of them are passing these winter nights without food and clothes and in dire condition. Let us stand by their side. Let us pray to God for their welfare," he added.

In London, the head of the worldwide Anglican church, Archbishop of Canterbury Rowan Williams, slammed "human greed" in his Christmas sermon, saying it threatened to wreck the Earth's fragile environmental balance.

People should treat each other and nature with "reverence", he said adding: "When we threaten the balance of things, we don't just put our material survival at risk; more profoundly we put our spiritual sensitivity at risk."

The archbishop also stressed the need to respect others and praised "brave and loving people" in Israel and the Palestinian Territories.