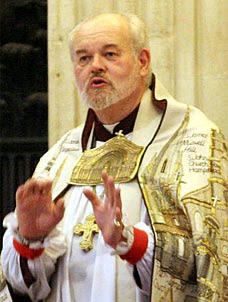 The Anglican bishop of London, Richard Chartres, says in a Christmas letter that the return of religious issues to centre stage in the public sphere is welcome, but he claims it has provoked a dangerous reaction from "secular fundamentalists."

The bishop, considered third in the (Anglican) Church of England hierarchy, has a diocese that contains 479 Anglican churches. He recalls that when he spent his first Christmas as a priest 35 years ago the church was "somewhat introverted and generally regarded with a mixture of pity and disdain".

He cites the sociologist Peter Berger who had predicted then that religion would be pushed to the margins of life, but who he says has since admitted he was wrong and that religious convictions and institutions have taken centre stage.

"This turn of the religious tide has brought encouragement to some, but now instead of disdain and pity there is fear and alarm … The danger is at such times that people resort to force and control, often with the best intentions," said Bishop Chartres.

"In our country there is a small but growing band of secular fundamentalists, encouraged by the success of Richard Dawkins' book 'The God Delusion', who portray faith as delusional and religion as some kind of 'virus' which needs to be extirpated if the reign of truth and goodness is ever to be realised," Chartres states.

The bishop notes, "We know from the tragic history of the 20th century where such totalitarian notions lead."

Bishop Chartres asserts, "The most dangerous 'god delusion' of all is to make gods of human beings by ignoring the dark perversity in human life and our own propensity to evil. We are so used to being flattered that if there is an obstacle in the way of realising the perfect society someone or something else might be to blame."

The bishop urges people of every "race and tribe" in London to join the growing numbers who assemble to worship, question and pray.

Latest Church of England figures show that regular attendance at the 479 churches in the London diocese has increased by 7 per cent over the past five years, to 63 302.