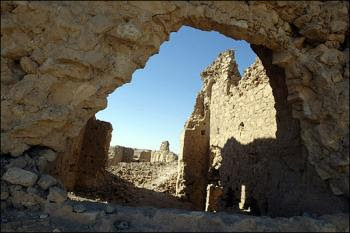 No-one celebrated Christmas in Al-Aqiser church on Tuesday, for what many consider to be the oldest eastern Christian house of worship lies in ruins in a windswept Iraqi desert.

Armed bandits and looters rule in the region and no one can visit the southern desert around Ain Tamur unescorted, local officials say.

But 1,500 years ago, the first eastern Christians knelt and prayed in this barren land, their faces turned towards Jerusalem.

The remains of Al-Aqiser church lie in the windswept sand dunes of Ain Tamur, around 70 kilometres (40 miles) southwest of the Shiite shrine city of Karbala, forgotten by most.

But some Iraqis are determined to restore the ancient edifice -- which some say preceded Islam in the region -- to its past glory.

"It is a place of worship, a church, and without doubt, the oldest church of the East," said Hussein Yasser, the head of the antiquities department of the province of Karbala.

"According to our research, it was build 120 years before the emergence of Islam in the region," Yasser said as he took an AFP correspondent on a tour of the site.

Islam emerged in the Arabian peninsula in 622, or, by Yasser's account, 15 years after Al-Aqiser was built in a region teeming with Christian tribes.

In time, Karbala overshadowed it and became a key Muslim Shiite pilgrimage destination, while across the region Christian communities began to recede.

Deserted by its worshippers, Al-Aqiser slowly sank into the sands and would have been totally forgotten had it not been for a team of Iraqi archeologists who stumbled on its ruins in the 1970s.

The foundations of the church jut out of the desert, forming a perfect rectangle 75 metres (yards) long by 15 metres wide.

The nave is clearly visible as well as the central part around the altar where masses were celebrated.

"The church was built facing Jerusalem," said Yasser, who has been struggling since 1993 to attract funds and interest to restore the church and carry out excavations in the area.

His efforts were briefly rewarded some years ago when the authorities agreed to finance a brief excavation that lasted six months.

The work revealed an archway which he believes probably belonged to an underground crypt, bearing inscriptions in Syriac -- the language spoken by the first Christians.

"I am sure there is a city underneath the sand," said Yasser, a Shiite Muslim.

"Even then the city was known as Ain Tamur and stood at a major trading junction between Persia, the Arabian peninsula and the Roman empire," he added.

"There used to be a vast lake. People made their livelihood from fishing," he said, adding that the site was more archeologically, than religiously, significant.

A sand embankment indicates the location of the outer walls that protected the church, and Yasser is convinced that the uneven terrain that surrounds the church hides a wealth of archeological evidence.

"There are certainly houses beneath it all, and inside I am sure we can find cooking utensils, inscriptions," he said.

In the past Catholic Chaldeans, the largest single Christian denomination in Iraq who follow an eastern rite but recognise the Pope in Rome, used to pray in Al-Aqiser on Christmas Day but the faithful have not returned in a long time.

The church "is part of out country's memory, part of the great civilisation that the Iraqis have built and it must be saved," said Yasser.

"The church does not belong to the Christians only or to the Muslims. It belongs to the world," Tamimi said.