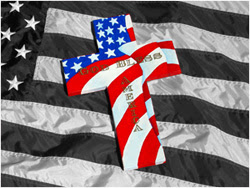 America remains an overwhelmingly Christian nation despite a drop in the number of believers over the past decades, according to a 2007 analysis.

Additionally, 11 percent of Americans said they had no religious identity, while another 2 percent did not answer.

The percentage of those who have identified with a Christian religion this year is down compared to several decades ago. This is largely because many Americans have adopted no religious identity and not so much because they have shifted to other religions, according to Gallup.

In 1948, Gallup found 69 percent of respondents identifying as Protestant and 22 percent as Roman Catholic, which overall constituted about a 91 percent Christian population in America.

Among self-described Christians in America, 62 percent said they are members of a church, down from 73 percent reported in the 1937 Gallup Poll. But the latest poll result was not significantly different compared to previous years. Since 2002, the self-reported church membership has been between 63 percent and 65 percent.

The Gallup Poll analysis on Christianity was released just after an international study on the most religious nations in the world by the German think tank Bertelsmann Foundation. The German study found that the United States had an 89 percent self-described religious population. Of the religious, the majority (62 percent) consider themselves to be highly religious.