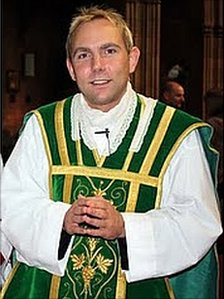 A former Anglican priest who left the Church of England to join the Catholic church, will be ordained on Saturday.

Father David Elliott resigned as vicar of Holy Trinity in Reading earlier this year to become part of a new branch of Catholicism called the Ordinariate.

He and 15 members of his congregation joined St James' Catholic Church in Reading in April.

Father Elliott said he and his congregation had been given an 'incredibly warm welcome'.

He said he had not experienced doubt or regrets.

"As we were being confirmed and received at the Easter vigil I thought to myself, 'do I have any regrets at all?'. No I didn't," he said.

Father Elliott said the "unsettling" process of moving churches had been made easier by the fact he had been given the support of members of his congregation, and because of the friendliness of parish priest and the congregation at St James'.

Others who have joined the Ordinariate have said they were prompted to change to Catholicism due to their views on the direction the Church of England was taking, such as the ordination of women.

Priests such as Father Ed Tomlinson, a former parish priest in Tunbridge Wells, Kent, said the Anglican church had been "shifting the goalposts".

Others felt developments in Anglicanism have led it away from traditions historically shared with Roman Catholics.

However Father Elliott said he had been prompted to make the move because of the "hand of friendship" offered by Pope Benedict, rather than because of disillusionment with the Church of England.

"The whole history of the Oxford movement of the 1830s was looking for ways in which Anglicans could be reunited with the Roman Catholic Churches," he said.

"People always were able to do that as individuals but not as groups and bringing their own traditions with them as well.

"A generous offer came to us from Pope Benedict and for many of us it would have been wrong to refuse."

The Ordinariate will be led led by three former Anglican bishops, Andrew Burnham, Keith Newton and John Broadhurst - who themselves converted earlier this year.

The Ordinariate will be funded initially by donations but its priests will not receive a salary, as they did in the Anglican Church.

The Catholic Church has described the establishment of the Ordinariate as "a unique and historic moment".
Source
EDITED BY CW Team

I wonder how many of these Ordinariate priests will still be active in Catholicism within 5 years? 10 years? Ditto for the laity making the same move?

New priests who are not married and who are ordained to the Ordinariate will not be allowed to marry.

So much for preserving their Anglican Patrimony!