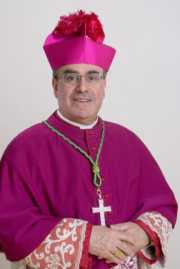 Mgr. Paul Cremona is to be consecrated Archbishop of Malta on Friday, taking the total of Maltese bishops up to 17.

Besides the bishops in Malta - Joseph Mercieca, Archbishop of Malta, Mario Grech, Bishop of Gozo, Nicholas J. Cauchi, Bishop Emeritus of Gozo, and Annetto Depasquale, who is serving as Auxiliary Bishop --nine others were installed as bishops to serve missions around the world: --Francis Baldacchino, OFM Cap., Bishop of Malindi, Kenya; --Albert Brincat, O. Carm, Bishop of Tarija, Bolivia; --Vincent Costa, Auxiliary Bishop of Londrina, Parana, Brazil; --Robert Camilleri, OFM, Bishop of Comayagua, Honduras; --Paul Darmanin OFM, Bishop of Garissa, Kenya; --Walter Michael Ebejer, OP, Bishop of Uniao da Vitoria, Brazil; --George Frendo OP, Auxiliary Bishop of Tirana, Albania --Joseph Grech, Bishop of Sandhurst, Victoria, Australia; --Sylvester Carmel Magro, OFM, Titular Bishop of Saldae, Libya.
Three other Maltese bishops are retired Vatican diplomats, namely: --Emmanuel Gerada Apostolic Nuncio to Ireland; --Paolo Giglio, Apostolic Nuncio to Egypt; --Francis George Adeodatus Micallef, O.C.D. Vicar Apostolic Emeritus of Kuwait. However, in recent times, no Maltese bishop has ever been elevated to a cardinal.
A cardinal is a senior ecclesiastical official in the Roman Catholic Church, ranking just below the Pope. The most important task for a cardinal is to elect a new pope whenever, by death or resignation, the Holy See becomes vacant. But the right to enter the conclave of cardinals who elect the Pope is now limited to those aged less than 80 years on the day of the Pope's death.
The creation of new cardinals takes place once approximately every three years at a meeting with the pope, known as a consistory, during which they receive the red hats that are the symbol of their rank.
The list is left to the Pope's discretion. Since 1962, all cardinals have had to be bishops In February, Pope Benedict XVI has named 15 new cardinals, his first nominations since taking over the papacy last year. There are 193 cardinals, 120 of whom are under age 80, and are, therefore, electors should there be a conclave.
Europe has 100 cardinals (60 electors), Latin America has 32 cardinals (20 electors), North America has 20 cardinals (16 electors), Africa has 17 cardinals (9 electors), Asia has 20 cardinals (13 electors), and Oceana has 4 cardinals (2 electors). Italy has 40 cardinals (21 electors), the United States has 15 cardinals (13 electors), Spain and France have 9 cardinals (6 electors) each, Philippines has 3 cardinals (2 electors), while Switzerland and Australia have 3 cardinals (1 elector) each. Germany's 5 cardinals, Poland and Mexico's 4, and Colombia's 3 cardinals are all electors.
Vatican Secretary of State, Cardinal Angelo Sodano is the Dean of the College of Cardinals. How come Malta being one of the most Catholic countries in the world -- around 95 per cent of the total population -- has no say in the election of a new pope even though it has so many bishops? The pertinent question was directed to the public relations officer of the Curia Charles Buttigieg. "Allow me to correct a wrong impression. The country's number of bishops has no bearing on the pope's decision to elevate a bishop to a cardinal. His Holiness will take in consideration a number of factors before naming a cardinal but there are no written rules", he explained.
Interestingly enough, a Maltese Bishop was once elevated to the Cardinalite, with the title of Santa Pudenziana. Fabrizio Sceberras Testaferrata was born at Valletta on April 01, 1757 and was ordained priest aged 44 in 1802. After serving as Apostolic Nuncio to Switzerland and Secretary of Bishops and Regulars in the Roman Curia, he was elavated to the Cardinalite in pectore in 1816.
His name was reserved for two years until April 6, 1818 when he was nominated Bishop of Senigallia. He died there at the age of 86 on August 3, 1843. A monument can be found at Mdina's Metropolitan Cathedral.