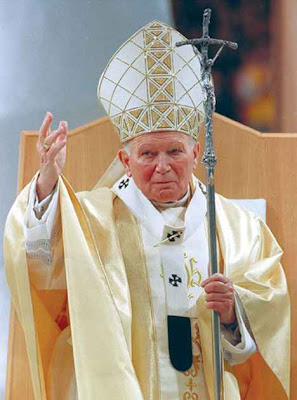 The beatification of Pope John Paul II may be delayed as the Vatican seeks more documentation regarding his almost 27 years as pope, Italian newspapers reported in late May.

According to the newspaper La Stampa, the chief holdup regards hundreds of letters he wrote before and after his election to Wanda Poltawska, a longtime friend and adviser to the pope.

Meanwhile, the newspaper Il Giornale reported that a commission of theologians meeting in mid-May decided the information contained in the official "positio," or position paper, was not complete enough.

In particular, the newspaper cited the fact that Cardinal Angelo Sodano, secretary of state under Pope John Paul, and Cardinal Leonardo Sandri, his deputy at the time, had not given testimony in the case.

Neither newspaper quoted any of the commission members by name nor included comments from current officials of the Congregation for Saints' Causes.

Passionist Father Ciro Benedettini, vice director of the Vatican press office, said June 1 there would be no official comment from the Vatican while the process was under way.

Pope Benedict XVI waived the five-year waiting period for the cause to begin, Father Ols said, "but at the same time, he wants the work to be done well and with maximum accuracy."

La Stampa published an interview with Poltawska June 1 in which she said she met Father Karol Wojtyla, the future pope, in 1950 when she was looking for a confessor and spiritual director to guide her in the long process of recovering from her internment as a political prisoner in the Nazis' Ravensbruck concentration camp, where medical experiments were performed on prisoners.

Along with her husband and often with their children, "we shared interests, important moments, spirituality and that love for nature that we experienced camping in the mountains of southern Poland and even in the golden cage that was (the papal villa at) Castel Gandolfo," after his election as pope in 1978, she said.

"From the first time I met him I knew he would become a saint," Poltawska said. "His holiness was evident; he radiated an interior light that was impossible to hide."

Poltawska said she has a "suitcase full of his letters," written over the course of 55 years.