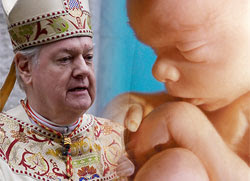 In a strongly worded article published next to a moving photo of an unborn baby in the womb, Cardinal Edward Egan, Archbishop of New York, compared tolerating abortions to the reasoning used by Adolf Hitler and Joseph Stalin to commit mass murders.

The cardinal begins his column for the latest edition of the archdiocesan newspaper “Catholic New York” by explaining that “the picture on this page is an untouched photograph of a being that has been within its mother for 20 weeks. Please do me the favor of looking at it carefully.”

“Have you any doubt that it is a human being?” Cardinal Egan asks.

“If your answer to this last query is negative, that is, if you have no doubt that the authorities in a civilized society would be duty-bound to protect this innocent human being if someone were to wish to kill it, I would suggest—even insist—that there is not a lot more to be said about the issue of abortion in our society. It is wrong, and it cannot—must not—be tolerated.”

The Archbishop of New York continues by asking: “Why do I not get into defining ‘human being,’ defining ‘person,’ defining ‘living,’ and the rest?”

“Because, I respond, I am sound of mind and endowed with a fine set of eyes, into which I do not believe it is well to cast sand. I looked at the photograph, and I have no doubt about what I saw and what are the duties of a civilized society if what I saw is in danger of being killed by someone who wishes to kill it or, if you prefer, someone who ‘chooses’ to kill it.”

After describing a recent video depicting the humanity of babies in their mothers’ wombs, the Archbishop of New York says that “if you can convince yourself that these beings are something other than living and innocent human beings, something, for example, such as ‘mere clusters of tissues,’ you have a problem far more basic than merely not appreciating the wrongness of abortion. And that problem is—forgive me—self-deceit in a most extreme form.”

“Do me a favor,” Cardinal Egan writes, “Look at the photograph again. Look and decide with honesty and decency what the Lord expects of you and me as the horror of ‘legalized’ abortion continues to erode the honor of our nation. Look, and do not absolve yourself if you refuse to act.”