Naomh An Lae - Saint Of The Day

Pierre Louis Marie Chanel was born on July 12, 1803 in the area of Belley in the Rhône-Alpes region of France. After training at minor and major seminaries he was ordained in 1827 and spent a brief time as an assistant priest at Ambérieu, where he met Claude Bret who was to become his friend and also one of the first Marist Missionaries.

From an early age he had been thinking about going on the foreign missions and his intention was strengthened by letters that arrived at Ambérieu from a former curate, then a missionary in India. Pierre applied to the bishop of Belley to go to the missions, but was appointed instead for the next three years as parish priest of Crozet, where his zeal and care for ths sick won the hearts of the locals. During this time he heard of a group of diocesan priests who were hopeful of starting a religious order to be dedicated to Mary, the mother of Jesus.

In 1831, Pierre joined the forming Society of Mary (Marists), who worked both on local and foreign missions. He was appointed first as spiritual director at the Seminary of Belley, where he stayed for five years. In 1833 he accompanied Fr Jean-Claude Colin to Rome to seek papal approval of the growing Society.

In 1836 the Marists were formally approved by Pope Gregory XVI and were asked to send missionaries to the territory of the South West Pacific. Chanel, professed a Marist on 24th September 1836, was made the superior of a band of Marist missionaries that set out on 24th December from Le Havre. They were accompanied by Bishop Jean Baptiste Pompallier who was to become the first Bishop of New Zealand. Pompallier had been appointed by Gregory XVI to care for the Vicariate Apostolic of Western Oceania. Pompallier based himself in New Zealand from 1838 and became the first Bishop of Auckland, New Zealand in 1848.

Their first port of call was the Canary Islands. Crossing over to South America, his friend Fr Claude Bret died at sea from a flu virus. By June they reached Valparaiso (where the French Picpus Fathers who had care of the Vicariate of Eastern Oceania had their base). By September they had reached Gambier, then Tahiti where the group transferred to another ship and set sail for Tonga. before first dropping two missionaries at Uvea (also named Wallis), the mainseat of the mission. Pierre Chanel went to neighbouring Futuna Island, accompanied by a French laybrother Marie-Nizier Delorme. They arrived on 8 November 1837 with an English Protestant layman named Thomas Boag who had been resident on the island and had joined them at Tonga seeking passage to Futuna.

The group was initially well received by the island's king, Niuliki. Once the missionaries learned the local language and began preaching directly to the people, the king grew uneasy, suspecting that Christianity would take away his prerogatives as high priest and king. When his own son, Meitala, sought to be baptized, the king sent a favoured warrior, his son-in-law, Musumusu, to "do whatever was necessary" to resolve the problem. Musumusu initially went to Meitala and the two fought. Musumusu, injured in the fracas, went to Chanel feigning need of medical attention. While Chanel tended him a group of others ransacked his house. Musumusu took an axe and clubbed Chanel on the head. Peter Chanel died that day, April 28, 1841.

News of his death took months to reach the outside world and almost a year before Marists in France learned of it. Bishop Pompallier, upon hearing of the death about six months later, arranged for a French naval corvette L’Allier, commanded by the Comte du Bouzet, to accompany the Mission schooner Sancta Maria and sail on 19 November for Wallis and Futuna Islands, taking with him Fr. Philippe Viard. The two vessels arrived at Uvea (Wallis) on 30 December 1841. They were able to locate and identify his remains, which were brought first to New Zealand in 1842  and eventually in 1850 to the Mother House of the Society of Mary in Lyon.

Eventually most on the island, including the chief Musumusu converted to Catholicism. Chanel was declared a martyr and beatified in 1889. He was canonised in 1954 by Pope Pius XII. His feast day in the Catholic Church is 28th April. The relics were returned to Futuna in 1977. 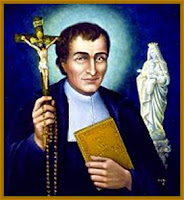 Louis Marie Grignion was born in the hamlet of Montfort, a Breton village about thirteen miles east of Rennes, on 31 January 1673. Later, as an itinerant preacher, he preferred to drop his surname and be called simply Louis Marie de Montfort, or le Pére de Montfort, the Father from Montfort. The second of eighteen children, Louis was one of the few who survived to adulthood. He was born into a family of deep Catholic faith, in an area of France renowned for its dynamic Christian life.

At the age of eleven, Louis Marie set out for Rennes, the capital of Brittany, to enroll in the Jesuit College of Thomas à Becket. The young student from Montfort was considered by his teachers to be intelligent, religious, artistic in nature and somewhat shy. It was under the guidance of the Jesuits that Louis's priestly vocation matured. The decision to enter the priesthood was made, so he tells us, at the Shrine of Our Lady in the Carmelite Church in Rennes. After eight years at the Jesuit College, Louis Marie decided to pursue his theological studies at Saint Sulpice in Paris. At the age of nineteen, a new chapter opened in his life. The young man bade farewell to family and friends at the bridge of Cess on the outskirts of Rennes.


Having left all, he crossed the Cesson bridge to a new life of total dependence upon Divine Providence. So convinced was he that God was truly his loving Father that he gave his money, baggage and clothes to the first beggars he met. Begging for food and shelter along the way, he walked to Paris, arriving in the rags of a mendicant. For the first two years, Montfort attended classes at the Sorbonne. The following six years of theological study, however, were spent under the tutelage of the Sulpicians themselves. Like the Jesuits, they found the student from Montfort to be a talented man of deep faith, intensely studious and strongly devoted to Our Lady. He was notable for the practical love he showed for the poor, for his desire to serve the outcasts of Paris society, and for a determination to live the gospel by identifying with the most neglected. All his life, but especially as a seminarian, Montfort was an avid reader, and thoroughly enjoyed his task as librarian at Saint Sulpice. Above all else, he was a man of the Bible. The Sacred Scriptures were his constant companion, and his sermons and writings - five major works in all - abound with biblical texts. Louis yearned to proclaim the Good News of God's love to the outcasts, to assure them of the love of Jesus and of the maternal care of Mary.

First Mass
At the Lady Chapel in the parish church of Saint Sulpice, Father Louis Marie Grignion celebrated his first Mass on 5 June 1700. From the age of eleven, he had completed sixteen years of formal study to reach this goal. Yet Montfort's priestly ministry itself would last only a further sixteen years. After a few years of preaching parish renewals and ministering to the destitute at the poor-house at Poitiers, Louis Mary was far from settled. He found it extremely difficult to discover how to implement his belief that God was calling him to serve the poor and to identify with them.


His solution was simple. This unknown young priest from western France would seek the advice of the Pope. And so he set out on foot from Poitiers, begging for food and shelter along the arduous and dangerous routes to the Holy City. In June 1706, Montfort met with Clement XI, pouring out his heart to the Vicar of Christ. Strangely, the Holy Father clearly saw in this young priest extraordinary gifts of God. He turned down Louis Marie's offer to proclaim the gospel in the wilds of Canada or in the Far East. Rather, the Pope named him Apostolic Missionary, telling him to return to his native land and renew the Church there. He spent the rest of his life conducting approximately two hundred missions and retreats throughout the villages and towns of western France, proclaiming the gospel of God's love with Spirit-filled power.


His bold, charismatic proclamation of God's love was heard in churches, barracks, poor-houses, and even in houses of prostitution. His preaching was a source of admiration for many, of resentment and, sadly, anger for others. Montfort's life-style as a poor, vagabond preacher, with a knapsack strung across his shoulder to carry his Bible, breviary and notebooks, was not considered dignified for a cleric. Several times the episcopal authorities forbade him to preach in one diocese or another. Always obedient, Montfort would move on.
With utter disdain for human respect, this saintly man identified with the poor, and found his greatest joy in opening for them the Word of God and offering them whatever material help he could locate. Typical of his actions was the event recorded in Dinan - probably one of many similar acts on his part - when the missionary tenderly embraced a dying, leprous beggar lying in the street, and carried him to a nearby religious house, crying out to the doorkeeper: 'Open up to Jesus Christ!' To the majority of the people, Father Louis Marie was simply the Good Father from Montfort. At times he was named the Father with the Big Rosary, for he ordinarily had a large rosary attached to the cord-like belt of his cassock.
Attracting thousands
His preaching, flowing from his own experience of God's love and Mary's maternal care, attracted thousands back to the faith. In a Jansenistic age which harshly stressed the distance between God and his people, he recommended even daily communion, a tender devotion to the Mother of God, and a total surrender to Jesus in Mary. Because of the style and contents of his preaching, this Elijah-like prophet was regarded by quite a few as no more than a strange misfit. He was poisoned on one occasion and, although it did not prove fatal, it caused his health to deteriorate even more rapidly. Other attempts were made on his life, yet Montfort was not deterred. His writings call for a loving, formal acceptance of who we truly are: the slaves of Jesus Christ. The term 'slave' always had, for Montfort, the evangelical connotation that we belong to the Lord, that we are loved by him, and that we are redeemed by the Incarnation and total offering of the Incarnate Wisdom for us.