Did Hitler try to kidnap the pope? 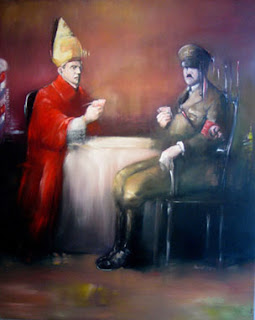 Controversy over the conduct of Pope Pius XII during the Holocaust has raged for over 40 years.

Pius's once sterling reputation for having done what he could behind the scenes for persecuted Jews first came under sustained attack in 1963, when Rolf Hochhuth's play The Deputy cast his failure to publicly denounce the Nazi genocide in an anti-Semitic light.

The bitter debate has never really stopped since, fuelled by Pius's ongoing canonization process: by last March the man who ruled the Roman Catholic Church from 1939 to 1958 was only a small step removed from beatified status, the last rung before full sainthood.

Even those, Jewish and Catholic alike, who might otherwise contemplate letting past tragedies go gently into the history books, are unwilling to ignore the present-day sanctification of a man about whose motives and actions so much uncertainty swirls.

What would have happened, for example, if Pius had excommunicated Hitler, a baptized Catholic?

Would German Catholics have stopped the entire genocide machine in its tracks, or would open enmity have simply caused the Nazis to turn their murderous impulses on the Vatican or on Catholics in general, while doing nothing for Jews?

That's where A Special Mission (Perseus) by American journalist Dan Kurzman, the first serious investigation of Hitler's little-known plan to kidnap Pius in order to keep him quiet about the Final Solution, brings a new twist to the story.

Pius the Vicar of Christ and Hitler the Antichrist loathed and feared one another as rival claimants for Europe's hearts and souls, says Kurzman. Stalin may cynically have asked of another pope, "How many divisions does he have?", but Hitler knew 40 per cent of his army was Catholic and that a 10th of the elite SS had refused to abandon the faith despite strong Nazi party pressure.

Pius, for his part, was aware of the depth of anti-Semitism that cut across German society and that nationalism had long trumped religion in Europe.

Had not Catholics on both sides of the Western Front dutifully mown down their co-religionists by the millions in the previous world war?

Neither leader wanted to issue a command that might backfire. Hitler, when not in a rage, feared creating a martyr; Pius, whose overriding concern was piloting his Church safely through the maelstrom, was wary of provoking a violent psychopath.

The standoff turned acute when the fall of Fascist Italy removed the last buffer between the two men in the summer of 1943.

Hitler sent German troops into Rome and ordered SS Gen. Karl Wolff to kidnap Pius, lest the sight -- "under his own window," in one German diplomat's words -- of Rome's Jews being rounded up for Auschwitz finally drive the pope to open protest. It's worth noting the threat went far beyond the personal -- Wolff's orders included executing the papal court and looting the Vatican.

According to Kurzman, who had extensive conversations with Wolff before the general's death in 1984, and with others who knew of the plan, Wolff had no desire to stick his head in a post-war noose by laying violent hands on a pope.

Instead he made his mission plain to Vatican officials, and relied on the mere threat of it to force silence, while using that silence to convince Hitler no further action was required.

Despite Kurzman's insistence that the kidnap plot was a vital factor in Pius's decisions, it's difficult to evaluate its importance. In the event, Pius never did directly denounce the Holocaust, but he and his city escaped the war largely unscathed, with Rome's monasteries and convents (and the papal summer home of Castel Gandolfo) stuffed with Jewish refugees.

Six decades later, the thousand-year Reich is history, and the Roman Catholic Church is a going concern.

That leads directly to the other core issue in the debate: did Pius have an obligation to speak out, whatever the consequences to himself or his flock? Popes have two jobs, according to historian José Sánchez, author of Pius XII and the Holocaust: their ancient responsibility of caring for the Church and their role in "the popular mind" -- of being a moral conscience for mankind.

But the second role, Sánchez says, is a modern development. "Pius would scarcely have recognized it, and it certainly wouldn't have been his priority. And it wasn't possible, within the constraints of the war, to have done both."

The Roman Empire:
The Edict of Caracalla in the year 212 CE grants the Jews full citizenship. The Jews had overcome initial hostility to become full members of society.

A century later Constantine become a Christian (a hotch potch of previous Pagan/Jewish myths with some new dogmatic embellishments) and persecution of the Jews begins.
They are excluded from all civil and military posts, forbidden to employ Christians, or to give to them or receive from them medical aid. Jewish/Christian intermarriage is deemed adultery and a capital offence. In a lawsuit between Christians and Jews, only Christian witnesses are acceptable. Ambrose in the West and Chrysostom in the East justify all this by giving it a theological basis.

Based on the absurd idea that one set of living people should be blamed for a supposed crime allegedly committed by some distant ancestors the Jews suffer centuries of discrimination at the hands of the Catholic Church.

On 17 July 1555 Pope Paul IV publishes the Bull Cum nimis absurdum which is to prove a landmark in anti-Semitism. The Bull stresses that by nature the Jews are slaves and should be treated as such. For the first time they are to be confined to an area know as a ‘ghetto’. Each ‘ghetto’ has only one entrance. Jews were obliged to sell all their property at knock down prices to Christians. They are restricted in commerce to rag trading. 95% of the Synagogues in Rome are destroyed. They are already without books since Paul IV had burned them all, including the Talmud, when he was a Cardinal. They are obliged to wear a yellow hat in public. These and countless other oppressive restrictions are imposed on Jews for a mythical crime they could not have been responsible for.

These oppressive measures are to be a blueprint for those adopted by another Christian army led by baptised Catholic Adolf Hitler in the twentieth century.

In 1581 Gregory XIII states that the guilt of the Jews in rejecting and crucifying the ‘christ’ character only grows deeper with successive generations entailing perpetual slavery.

Leo XII (1823-9) decided Christians were getting lax. He again locks Jews inside ghettos. He also forbade them vaccination against smallpox during an epidemic because it was ‘against the natural law’.

Pius IX (1846-78) imprisons a Jew of good standing for employing an elderly Christian lady to take care of his linen.

1858 the case of Edgardo Mortara takes place. The child snatched from his parents on the basis that their illiterate Christian babysitter had secretly baptised him.

In September 1870 Italian troops take Rome amid scenes of jubilation. Eleven days later on 2 October 1870 the Jews, by royal decree are granted the freedom which the Catholic Church has denied them for fifteen hundred years. The last ghetto in Europe is dismantled. The Jews rejoiced, little did they know their darkest hour was yet to come.


The Catholic Church tried to eliminate the Jews by forced conversion Hitler will try by forced extermination.

On July 20, 1933 the Reichskonkordat was signed by Eugenio Cardinal Pacelli and Franz von Papen on behalf of Pope Pius XI and President Paul von Hindenburg, respectively. In the Concordat, the German government, with the cooperation of Rome, achieved a complete proscription of all clerical interference in the political field (articles 16 and 32). It also ensured the bishops' loyalty to the state by an oath and required all priests to be Germans and subject to German superiors. Restrictions were also placed on all Catholic organisations. Hitler and the Pope had stifled all possible opposition by Catholics within Germany. (It is still valid today in Germany)

September 15 1935
The Nazis passed the Nuremberg Law: the similarities to the decrees of Innocent III and Paul VI are beyond dispute.
When the Nazis named Jewish areas of confinement ‘ghettos’ they were aiming expressly to give their policies continuity with those of the Popes and a species of respectability.

Paul XI who died in 1939 wrote an anti-fascist encyclical which went unpublished at his death. His successor is Eugenico Pacelli, Pius XII, was more cautious. He feared communism because of it’s antipathy to organised religionism more than he did fascism with which the Church has found an accommodation in countries across the globe.

The Second World War began and a renewed persecution of the Jews leading to Die Letzte Lösung: the Final Solution.

Rome’s reaction in the years that followed became know as The Great Silence. The Catholic Church, a veritable hyper machine for the manufacture of decrees and dictates on everything from where you go when you die to which way you can have sex never spoke out about the extermination of the Jews. Over 23 million Germans, twenty five percent of the SS and in total one third of the Nazi army were Catholics. None of them including Hitler are ever excommunicated save one: Joseph Goebbels for the crime of marrying a protestant.
Despite international condemnation the one man Hitler feared most, the Pope, never spoke a word. Winston Churchill called it ‘probably the greatest and most horrible single crime ever committed in the whole history of the world.

Did the Nazis have a plot to kidnap the Pope?

Who gives a shit!

The world learned the horror of genocide, the Catholic Church did not. Paul VI in a sermon preached on Passion Sunday 1965 still would not clear the Jews of killing the Christ character. In his sermonising he said “Jews were predestined to receive the Messiah and had been waiting for him for thousands of years. When Christ comes, the Jewish people not only do they not recognise him they oppose him, slander him and finally kill him.

Finn McCool
It’s not just time to get off my island I think it’s time to disband..