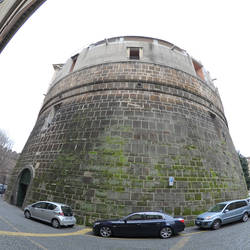 The Vatican scandal over shady bank accounts and millions in suspect transfers began shortly before sunrise on June 5 on Via Giuseppe Verdi, a picturesque street in the old part of Piacenza, a town in northeastern Italy.
An elderly gentleman in a tailor-made suit had just left his house with a leather briefcase dangling from his right hand.
He was on his way to his car.
It was to be an important day for Ettore Gotti Tedeschi, who had recently been fired as the head of the Vatican bank -- even if it turned out differently than he'd expected.

Tedeschi was planning to go to the Vatican on that morning, but he never got there.

The 67-year-old banker missed the high-speed train to Rome, meaning he couldn't, as he had planned, get into a taxi at the Italian capital's central station for the short journey across the Tiber River to the Vatican.

There, he had hoped to take the documents out of his briefcase and hand them over to a confidant of the pope.


Instead, Gotti Tedeschi found four men waiting for him in the street -- not a hit squad as he feared at first, but investigators with the Carabinieri, Italy's national military police force.
Even before he reached his car, they presented him with a search warrant and escorted him back to his house.
For several hours, they searched through his sparsely furnished, cloister-like home office.
At the same time, other officers were searching through Gotti Tedeschi's office in Milan. Among the objects they confiscated were two computers, two cabinets' full of binders, a planner and his briefcase.
The investigators were pleased.
While they made but little headway in their corruption investigation involving a client of a company Gotti Tedeschi had once headed, an Italian subsidiary of the Spanish banking giant Santander, they stumbled upon something else in there search which proved to be spectacular.
The documents confiscated from Gotti Tadeschi, a former confidant of the pope, provided Italian law-enforcement officials insight into the innermost workings of the Vatican bank.
The secret dossier includes references to anonymous numbered accounts and questionable transactions as well as written and electronic communications reportedly showing how Church banking officials circumvented European regulations aimed at combating money-laundering.
A Possible Motive
The drama unfolding in the Vatican is now heading toward a climax. First, it was "il corvo," the raven, whose revelations about life in the court of the embattled and exhausted Pope Benedict XVI caused months of unease.
Then came the arrest of Paolo Gabriele, the pope's butler, whom the Vatican has fingered as the source of the private papal correspondence that was leaked to the public.
And now the scandal surrounding Gotti Tedeschi is providing a possible motive for the Catholic soap opera: money.
The pope had apparently tasked the financial executive with making the Vatican bank more transparent.
But by approaching his task with perhaps an excess of zeal Gotti Tedeschi upset powerful forces within the Roman Curia, the Vatican's administrative and judicial apparatus.
Several high-ranking officials within the Curia viewed the bank, officially known as the Institute for Works of Religion (IOR), as something akin to a trust company for clandestine monetary transactions that is not only used by the Church, but allegedly also by the mafia as well as corrupt politicians and companies.
In one of the seized Gotti Tedeschi memos, he wrote: "I've seen things in the Vatican that scare me."
It is a clear turning, one which transforms the so-called "Vatileaks" affair into a financial scandal that could seriously damage the reputation of the Holy See.
Internal correspondence dated May 22 from a member of the bank's supervisory board to the Vatican's Secretariat of State notes that the Vatican bank is presently "in an extremely fragile and precarious position" and that the situation had reached "a point of imminent danger."
The next act in the drama is set for Wednesday. Money-laundering experts from the Council of Europe will present a preliminary report on the Vatican in Strasbourg.
It currently looks as though they will indicate serious misgivings about whether the IOR has taking sufficient precautions against money-laundering.
Their worries are corroborated by the work of Italian authorities. In questioning sessions sometimes lasting several hours, Gotti Tedeschi told public prosecutors whom he trusted in the Vatican, other than Pope Benedict XVI, and whom he didn't.
The banker reportedly fingered Secretary of State Tarcisio Bertone as the ringleader of his "enemies," accusing him of doing everything possible to keep the Curia's accounts hidden from Italian authorities.
The Vatican has been trying to make its bank eligible for inclusion on the Organization for Economic Cooperation and Development's so-called "white list" of financial institutions not suspected of being involved in money-laundering or terrorism financing.
But Gotti Tedeschi reportedly complained that: "If we continue with Bertone's line, we'll never get off the black list."
Alarmed Vatican Leadership
Fabio Palazzo, Gotti Tedeschi's Milan-based lawyer, has declined to discuss details of the interrogations and the content of the documents seized from his client.
Nevertheless, he stresses that the documents contain "useful facts" that would indicate that there were no legitimate grounds for sacking Gotti Tedeschi as head of the bank.
The Vatican leadership is alarmed. Archbishops and cardinals are far from thrilled that Italian officials are now rummaging around in their secret affairs.
Papal spokesman Federico Lombardi has openly threatened Italy's law-enforcement apparatus and urged it to kindly respect "the sovereign rights of the Holy See."
In other words, he believes that all those documents including confidential details about the Vatican bank that were seized during the search of Gotti Tedeschi's home should not be in the hands of Italian investigators.
The fears of the pope and the Curia are well-founded. In the past, every time Italian prosecutors have stepped in and confidential documents have found their way to light, the secretive ways of the Vatican bank have always ended up damaging the Church's prestige.
For more than 40 years, the IOR, founded in 1942, has been regularly embroiled in scandals, including bribery money for political parties, mafia money-laundering and, repeatedly, anonymous accounts.
Many who have become ensnarled in illegal business dealings with the Vatican bank have been forced to pay with their lives, while others have spent years behind bars.

Despite all of its sacred and solemn promises, the Vatican has succeeded in keeping the pope's bank a haven for money-launderers.

And instead of being on some Caribbean island, this one is right in the middle of Europe, in the heart of Rome.