Vatican switchboard sees a human touch as the answer 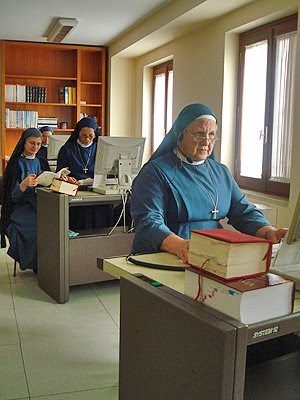 Telecommunications technology of the early 21st century has produced a phenomenon known as "phone hell": an audio inferno where callers are tormented either by mechanized voices or human ones with less soul than the machines.

But the opposite exists. It can be found here in a simply furnished second-floor room where multilingual nuns in gray habits answer phones with an unfailingly sweet-voiced greeting: "Pronto, Vaticano" (Hello, Vatican).


For 50 years, the nuns of the order of the Sister Disciples of the Divine Master have operated the Vatican switchboard.

They are the gatekeepers of the Holy See.

The sisters field half a million calls a year from all over the world. They assist the friendly, the loud, the troubled.

They help the faithful negotiate a labyrinthine Roman Catholic Church bureaucracy whose instincts tend toward discretion, if not mystery.

Sister Maria Clara, the 55-year-old chief operator, is gentle and bespectacled, her Italian tinged with her native Korean. After 11 years on the switchboard, she sees her job as a blessed calling.

"People ask us: 'So you really work on Christmas? You work on Easter?' " she said. "Of course we do. The church is a mystic body. I feel that we are the heart of the church. And the heart never stops."

Behind her, half a dozen colleagues murmured into headsets. They occasionally consulted Bible-sized directories next to their computer terminals.

Many calls were routine inquiries about papal activities, hotels, museums. That information is available in a recorded message as well, but church officials want to preserve an oasis in the often harsh subculture of switchboards.

"People are adamant, they say, 'I don't want to be answered by a machine!' " said Andrea Mellini, the gray-bearded director of the Vatican's telecommunications department. His staff includes an Austrian engineer and 10 nuns from locales as diverse as India and Poland. "I like to think this is the most human call center there is. We can treat people the way others do not."

It takes time, skill and diligence for the operators to figure out the internal workings of the Vatican, Mellini said. Their average age is close to 60.

Sister Maria Grazia, 71, became an operator 14 years ago after serving as a missionary in Africa. The robust, jolly Italian speaks English, Spanish, French and Korean and gets by in other languages too. Most of her calls come from Asia, Africa and the Americas. And she talks to quite a few people who say they need an exorcist.

At least once a day, someone insists on speaking, urgently and directly, with Pope Benedict XVI himself. The sisters respond with tact and prudence. They never say an outright "No."

Instead they try to learn more and see if a priest, the Vatican press room or a church official can help.

"Sometimes they won't be satisfied with even a bishop -- their problem can only be solved by the pope," Sister Maria Grazia said.

Some callers cross the line between tormented and deranged, between lonely and abusive.

Most of those calls, however, take place during the midnight shift when a skeleton crew of male operators -- civilians, not priests -- takes over.

The sisters work from 8 a.m. to 8 p.m. They recognize and tolerate certain regulars. One frequent caller identifies himself as Saint John the Baptist. He's harmless, though he gets touchy if they don't address him as "Saint John."

"He asks me to pray with him, and I do," Sister Maria Clara said earnestly. "Sometimes I have to put him on hold to take other calls. But he waits."

A poster near her desk depicts Don Giacomo Alberione, the founder of the 94-year-old Pious Society of Saint Paul to which the sisters' order belongs. Alberione's image is juxtaposed against telecom towers emitting waves and the word "Evangelism."

In the 1950s, Pope Pius XII gave him the mission of modernizing the Vatican's phone system.

"And because he was also a visionary when it came to the equality of women, he decided that the sisters should be the ones to staff the switchboard," Mellini said.

The Vatican has accepted modernization; the sisters will get some state-of-the-art pointers soon during a seminar with an outside expert. But the sisters are determined that some things will never change.

"At least when they call us they don't hear a machine, they hear a voice," Sister Maria Grazia said.

A Vatican contribution to world sanity.

I particularly like the description of the operators' vocation as "a blessed calling". No pun intended I'm sure!

Small point on your right hand column: it's Mí na Nollag. Nollag is the genitive, Nollaig the nominative. It's a very common mistake.