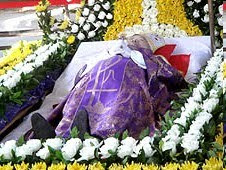 Retired Bishop John Yang Shudao of Fuzhou who spent at least 30 years in prison life because of his faith has died at the age of 91.

The late bishop who headed the underground Catholic community in Fuzhou suffered a stroke and became unconscious several days before his death on Aug. 28.

He died at St. Teresa’s Church in his hometown in Liangjiang county shortly after being discharged from hospital.

His funeral, to be presided by underground Bishop Peter Lin Jiashan, is scheduled for Sept. 1 at the same church which has a capacity of 3,000.

Bishop Lin was a former coadjutor bishop of Fuzhou diocese but now apostolic prefect of Jianou, according to a Church source close to the Holy See.

Several Church sources told ucanews.com that many government officers came to the church on hearing of the bishop’s death.

“They are concerned about security issues and have restricted the number of people paying tribute,” one said.

Fuzhou diocese currently has about 250,000 Catholics, with 81 “underground” and 27 “open” priests. The government recognizes the “open” Catholic community but not the “underground” one.

Father Joseph Li Ronghua, coordinator of the open community, told ucanews.com that he heard of Bishop Yang’s death but has received no further information from the underground side. He and many of the “open” priests had never met the bishop, he said.

Bishop Yang told ucanews.com in 2004 that reconciliation with the open Church would mean “a betrayal of faith.”

In addition to the spilt between the open and underground communities since 1980s, the “underground” Catholics have in the past decade themselves split into two factions, one led by Bishops Yang and Lin and another led by Father Lin Yuntuan.

Currently, “underground” Bishop Vincent Huang Zhoucheng of neighboring Mindong diocese is the administrator of Fuzhou diocese, according to a Church source close to the Holy See.

Church sources are concerned about the diocese’s future. They agreed the funeral is a testing case for reconciliation. “If factions cooperate for the funeral, there can be room for communications. Otherwise, reconciliation will be distant,” a source said.

Bishop Yang was born on April 16, 1919 and was ordained a priest in 1947. The then Father Yang was arrested with other priests and sentenced to life imprisonment in 1955 for refusing to denounce the Pope and to join the government-sanctioned independent church.

Bishop Yang was released in 1981 after 26 years in prison. He was clandestinely ordained a bishop in 1987.

He was rearrested in 1988 and jailed for another three years.

Since then, he has been arrested several times and was under surveillance.