Feast Of Saint Stephen of Hungary 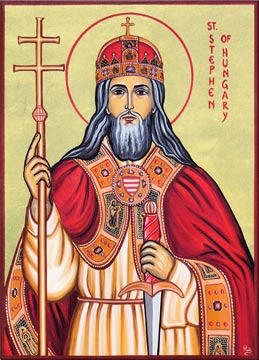 A name that struck fear into the heart of civilized Europe.

A name that was synonymous with paganism and brutality until a prince named Stephen led these Magyars from primitivism to Hungarian nationalists.

Seven tribes of Magyars (early Hungarians) migrated west of the Ural Mountains and into the Carpathian Basin about 895 AD.

These seven tribes were led by chieftans, the most powerful of whom was named Árpád. After conducting years of raids into the civilized areas of Europe, it was from Árpád that the line of kings of Hungary would originate. [Nelson]

The Magyars used the law of senioratus to decide the next chief. This meant that the son of the chief did not inherit the throne but instead the oldest able-bodied male of the line of Árpád did.

This worked well for awhile but it came back to haunt the Magyars again and again. Yet for a time it was undisputed, that is until a man named Géza became chief, also know as Grand Prince, in the mid 900s. [Sisa 15] Géza was more open to the Christianity practiced by Western Europe and invited missionaries to the country to convert the largely pagan population. [Sugar 16] This did not have much effect but the first step towards Christianity had been taken and before Géza's death he did something unprecedented. He named his son, Vajk, as his successor. Vajk had been given the Christian name Stephen, or István in Hungarian, early in his life and it was this man who was to become Hungary's first king. [Sisa 15]

The first problem István faced as Prince was caused by the law of senioratus. His cousin, Koppány, was the heir to the throne by this rule and he claimed his right upon the Grand Prince's death. However, István rejected this claim and refused to give up the throne. In response Koppány started a pagan uprising but István put down the revolt and Koppány was killed and quartered. [Sisa 15-16]

With Koppány out of the way, István proceeded to spread Christianity, reforming his kingdom. In order for his nation to be assimilated into Europe, he asked Pope Sylvester II for a crown because he realized that asking the Holy Roman Emperor for one would cause him to become a vassal of this empire. He was granted a crown by the pope and crowned king on Christmas day, 1000 AD. This integrated Hungary into the rest of the Europe. [Sisa 16]

Though the chiefs before István had their capital near what is modern day Budapest, István chose instead to locate his at the town of Esztergom. It was here that he installed Hungary's chief bishop who had dominion over five of the ten bishoprics in Hungary. [Sugar 17]

In the years to come István pushed reform upon the country. Some of these new measures included giving private individuals the right to own land, organizing the country into counties headed by governors, and putting the armed forces under royal control.

He also instituted religious reform, often forcing people to accept Christianity and making laws that required church attendance and tithing. A little harsh perhaps, but it accomplished the purpose. On the whole, though, István was a fair king who the people respected. [Sisa 16-17]

István planned on leaving the kingdom to his son, Imre, whom he instructed in the art of ruling a kingdom. But while hunting Imre died tragically from a wild boar's attack in 1031. Some suspected that Imre had been killed by a man named Vazul who had the right to the throne after István by the law of senioratus but this accusation was never proven. István eventually died a sad man in 1038 and a fight immediately broke out over the throne. István and his son Imre were both canonized by the Roman Catholic Church in 1083 and Saint István's day is still celebrated in Hungary. [Sisa 17-18]

Saint István was a man with a mission. This mission he managed to accomplish in the course of his life and the reforms he instituted lasted for centuries to come. His most important contribution, though, was to bring to Hungary the status of a nation. Though small, this country would come to effect Europe in some very important ways in future centuries.

"This meant that the son of the chief did not inherit the throne but instead the oldest able-bodied male of the line of Árpád did." I completely agree with that. There's a really interesting debate that I thought would be of interest on evolution vs. intelligent design going on at http://www.intelligentdesignfacts.com