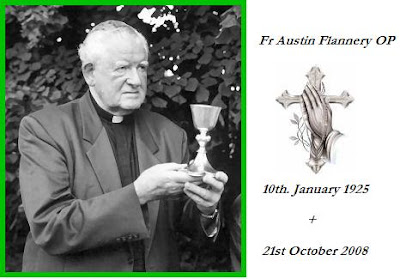 This was an attempt at reconciliation by the Order and the English Dominican Province. Also with Austin in Oxford was Fr Finbar Matthew Kelly, who is now in the Dominican Priory in Kilkenny.

Austin was one of the most well-known Irish Dominicans of his time.

During and after the Vatican Council he made available in English all the documents from the event.

At the helm of Dominican Publications, he was in a position to make available a wide range of religious publications to the general public.

He broke away from the clerical mind set of his time and spoke in a language that was appealing and made sense in a changing Ireland.

Austin had the great ability of making life-long friends with people across a wide spectrum of beliefs and ideas.

He had a great love for the Order and felt at home at St Saviour's in Dublin where he spent most of his Dominican life.

Some years ago German Railways named one of their InterCity trains after St Albert The Great.

It was something Austin took great pride in and any time he met anyone with German connections he would make it his business to tell them about it.

Austin was well respected by his Dominican colleagues and those who lived with him speak fondly of a man, who was gracious and kind.

Father Austin served as Chaplain of the Flannery Clan during its formative years and gave us great support in our hour of need. This was characteristic behaviour from the warm-hearted man and he shall be greatly missed by his many fellow Flannerys around the world. A gentle giant, both in intellect and physical presence. The above photograph was taken in 2000 by Pádraig Ó Flannabhra F.I.P.P.A. after the inaugural Clan Mass in Dublin. He is holding the James Flannelly Chalice (a priceless relic dating from 1647, loaned to us for the occasion by the Bishop of Killala). Upon reflection, by word and deed, dear Father Austin was also priceless and we were privileged to know him on earth. May God rest his Soul.