Schönborn hopes papal resignations will not catch on 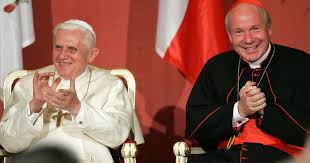 The Archbishop of Vienna, Cardinal Christoph Schönborn OP, has said he does not think papal resignations should become the norm.

He hoped that it would not become the tradition for a Pope to resign as the former Pope Benedict XVI had done, Schönborn said on Austrian state television in a special programme on 2 January to mark the death of the former Pope.

“It must not become the tradition. I am convinced that the right thing is for Popes to remain in office until the end of their lives. That’s how it has been for centuries,” Schönborn said.

But he added that Benedict’s resignation had at the same time also been an important sign “that the Pope is only the Pope and not the dear Lord”.

The Dominican cardinal said he hoped that Pope Francis would not resign.

He paid tribute to Benedict who had been a close friend of his for many years.

Addressing the accusation that Pope Benedict XVI had covered up the case of a particularly serious priest abuser when he had been Archbishop of Munich from 1977 to 1980, Schönborn said the whole case should be reopened and the time when it happened taken into account.

“As far as I remember, he openly and honestly declared that he made a mistake at the time. And that well befits a Pope,” Schönborn said, adding: “A Pope is not infallible in everything. He is a human being. And can certainly also make mistakes.”

Benedict XVI’s German publisher, Manuel Herder, head of the Herder Publishing House, also paid tribute to the late Pope Emeritus. In an interview for KNA, Herder said Benedict had been “The Pope of Books”.

Joseph Ratzinger had received his first author’s contract with Herder in 1956 and Herder had in all published 60 of his books.

After Benedict’s Jesus of Nazareth had sold half a million copies, Herder had published his collective works.