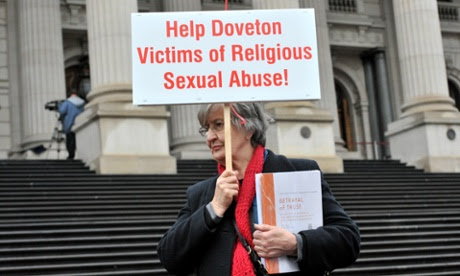 The Catholic church's "institutional failure" to respond appropriately to child abuse extends from parish priests to its leader in Australia, Cardinal George Pell, according to the report tabled on Wednesday in the Victorian parliament on the handling of child abuse by religious and other organisations.

The inquiry took Cardinal Pell to task in its report over his attempt to separate the church as a whole from the actions of senior religious figures it said had "minimalised and trivialised" the issue.

In a swipe at Cardinal Pell's evidence, its report said that following repeated questioning he agreed some bishops and religious superiors had covered up the issue.

The committee also challenged Cardinal Pell over a speech he gave in Ireland in 2011 in which he said a supreme court judge had advised him the sex abuse scandal "would bleed us to death" if not cleaned up.

Its report said Cardinal Pell – the archbishop of Melbourne from 1996 to 2001 – seemed to indicate the church's central aim was to safeguard its own interests.

"It is noteworthy that this description of objectives contains no acknowledgement of the terrible suffering of victims," the report said.

Accompanying the questions raised over Cardinal Pell is a claim in the report that Catholic clergy in Australia are responsible for six times more child sexual abuse than all the other churches combined.

Professor Patrick Parkinson of the University of Sydney and a former consultant on the church's Towards Healing protocol provided compelling research to the inquiry.

"The levels of abuse in the Catholic church are strikingly out of proportion with any other church, and that is the reality," he said.

The committee also rejected evidence of other church leaders that awareness of sexual abuse was "slow to percolate through society and the church".

"Rather than being instrumental in exposing the issue and the extent of the problem, the Catholic church in Victoria minimalised and trivialised the problem, contributed to abuse not being disclosed and ensured the community remained uninformed," the report said.

The committee noted the Catholic church's structure assisted in covering up sexual abuse through a system of non-accountability.